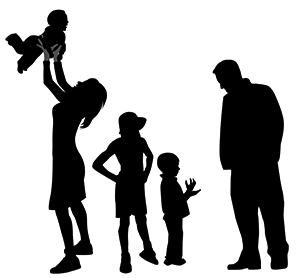 Dozens of news stories over the past year have reported on the disturbing data showing that Americans are dying younger than people in other wealthy countries and falling behind in many other measures of population health.

But much of the reporting I’ve seen shies away from covering a crucial part of the story: How social inequality may be the most important reason why the health status of Americans is failing to keep up with progress elsewhere.

Being born into poverty, growing up with curtailed opportunities for education and employment, living in a disadvantaged neighborhood – these social determinants of health are like the cards you’re dealt in a game of poker. It’s hard to win if the deck is stacked against you.

Researchers in sociology and public health have developed a fair amount of evidence that social status (typically measured by income or education) may be the most significant shaper of health, disability and lifespan at the population level. In the picture that is emerging, social status acts through a complicated chain of cause-and-effect. Education equips people with knowledge and skills to adopt healthy behaviors. It improves the chances of securing a job with healthy working conditions, higher wages, and being able to afford housing in a neighborhood secure from violence and pollution. The job security and higher income that tend to come with more education provide a buffer from chronic stress – a corrosive force that undermines health among lesser educated, lower income people. Research consistently shows that more education gives people a greater sense of personal control. Positive beliefs about personal control have a profound impact on how people approach life, make decisions about risky behavior, and cope with illness.

Since 1980, virtually all gains in life expectancy in the U.S. have occurred among highly educated groups. In a revealing analysis published in 2008, researchers looked at long-term changes in infant mortality and adult deaths before age 65 and found a widening gap between haves and have-nots over the past 30 years. If all people in the U.S. population experienced the same health gains as the most advantaged, they found that 14 percent of the premature deaths among whites and 30 percent of premature deaths among people of color would have been prevented.

But news outlets seem almost afraid to dig into questions about social inequality. Take, for example, CNN’s coverage of the Institute Of Medicine’s “Shorter Lives, Poorer Health” report in January. The IOM experts examined many measures in which the United States is lagging behind gains in other nations: infant mortality, disabilities, homicides, teen pregnancy, drug-related deaths, obesity, prevalence of AIDS, and life expectancy.

When the CNN coverage got around to explaining likely causes, it tossed out a range of possibilities, most of them blaming individual behavior. Compared with other wealthy nations we eat too much, spend more time driving than walking, fail to use seat belts, abuse more drugs, and use guns to shoot each other more. In the middle of this laundry list, the CNN report makes a glancing reference to the social determinants of health: “Americans benefit much less from social programs that could negate the effects of poverty.”

In July, a headline-garnering paper in the Journal of the American Medical Association explained how the U.S. lapsed from 20th to 27th among wealthy nations in terms of life expectancy at birth, and from 18th to 27th in terms of premature deaths.

The coverage by CBC News limited consideration of solutions to one paragraph, again mostly talking about individual behavior: “In many cases, the best investments for improving population health would likely be public health programs and multisectoral action to address risks such as physical inactivity, diet, ambient particulate pollution and alcohol and tobacco consumption,” the report said.

The New York Times last year offered a similar, limited take in its coverage of an August 2012 study in Health Affairs showing the widening gap in life expectancy between the lesser educated and those with college degrees. Among white women without a high school diploma, life expectancy at birth decreased by five years between 1990 and 2008. The authors of the study prominently concluded that the “message for policy makers is clear: implement educational enhancements at young, middle, and older ages for people of all races, to reduce the large gap in health and longevity that persists today.” The further noted that “efforts to modify behavioral risk factors alone are not likely to have a major impact on disparities in longevity.”

The Times story skipped over the issue of unequal access to education and highlighted individual behaviors (prescription drug overdoses, smoking, obesity) as possible explanations, along with lack of health insurance.

Blogger Courtney McNamara and others took The Times to task for focusing on “downstream” factors such as individual behavior, rather than digging deeper into the possible role of social inequality as a root cause:

“At the end of the article, Lisa Berkman, director of the Harvard Center for Population and Development studies, at least begins to shift the focus further up the causal chain and notes that the reversal in life expectancies ‘should be seen against the backdrop of sweeping changes in the American economy and in women’s lives,’ highlighting the deleterious impact of low-wage jobs on women’s health,” McNamara wrote in her blog.

“It is now well evidenced that in places where income inequality is greater, population health outcomes, like life expectancy and infant mortality, are worse. Unfortunately American public health professionals, and health journalists alike, continuously fail to acknowledge and translate the implications of this evidence.”

For years, it turns out, media coverage has pretty consistently framed the issue of health inequality in a way that downplays the role of social inequality as a root cause and that emphasizes the importance of individual behavior. That’s according to social scientist Annice Kim and colleagues, who analyzed more than 3,800 news articles on racial and ethnic disparities in health appearing in U.S. newspapers from 1996 to 2005.

Only about 30 percent of the news reports attempted to explain causes or solutions. Among the solutions that experts or others in the stories discussed, 48 percent called for changing individuals’ behavior, while 23 percent called for societal changes such as improving schools, creating employment opportunities, or improving neighborhoods.

Why is it important for reporters to dig deeper than individual behavior? Social scientists Bruce Link and Jo Phelan broke it down in a paper published 18 years ago and still worth reading in its entirety. I’ll quote a few passages:

“One reason is that efforts to reduce risk by changing behavior may be hopelessly ineffective if there is no clear understanding of the process that leads to exposure. For example, there are powerful social, cultural, and economic factors shaping the diet of poor people in the United States. Consequently, providing information about healthy diet to poor people and exhorting them to follow nutritional guidelines is unlikely to have much impact. Without an understanding of the context that leads to risk, the responsibility for reducing the risk is left with the individual, and nothing is done to alter the more fundamental factors that put people at risk of risks.”

Link and Phelan further assert that lawmakers and public health officials are likely to go astray if they focus policies on individually-based risk factors, for two reasons:

“First, without understanding the social conditions that expose people to individually-based risk factors, interventions will fail more often than they should. This will occur because interventions will be targeted to behaviors that are resistant to change for unrecognized reasons. The consequence will be that lives and money are wasted, and the American public will lose confidence in our ability to implement changes that really improve health. Second, some social conditions are fundamental causes of disease and as such cannot be effectively addressed by readjusting the individually-based mechanisms that appear to link them to disease in a given context. If we wish to alter the effects of these potent determinants of disease, we must do so by directly intervening in ways that change the social conditions themselves.”

I’m not suggesting that journalists should be acting more as advocates for a position. How best to extend economic opportunity to the disadvantaged and educate children are controversial matters, to say the least. And not all researchers are convinced by strong claims that school funding, tax credits, or income support will do more to improve health than policies more narrowly focused on changing behavior. (Much of the research linking socioeconomic status and health is observational, which means it shows correlation, not causation.) But the debate is at least worth covering. As it stands, even an avid reader of health news might never learn about the growing evidence that social inequality may be the fundamental problem we need to address if we want to reverse the disproportionate burdens of disease and death in America.

To help reporters cover these issues, AHCJ will soon launch a core curriculum area on the social determinants of health. To help journalists broaden the frame of health coverage to include these factors, I will hunt for useful resources, highlight examples of excellent work, and moderate ongoing discussions with fellow journalists and experts in sociology and public health. If you have questions or suggestions for future resources on the topic, please send them to joe@healthjournalism.org or tweet them to @rojasburke.

9 thoughts on “Social inequality: A blind spot for health reporters”