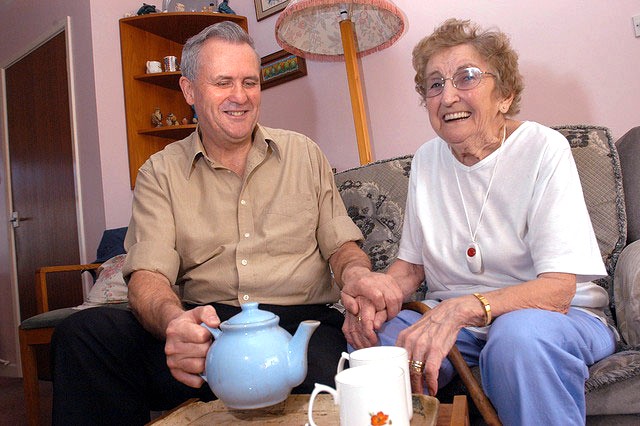 In what seems like typical Washington double-speak, home health care is being held up by policy makers as an ideal cost-effective solution to rising medical costs and hospital readmissions, while simultaneously being hit with across-the-board cuts in base payments and changes in documentation rules by the Centers for Medicare & Medicaid Services.

“Hospitals or nursing homes are no longer the only options. In the months and years to come, the home health care industry will become the de facto solution for many as our aging population requires more care.”

Reid also spent some time pointing to what he called “Tea Party extremism” that he said prevented Congress from addressing issues like Medicare reform. “We can’t pass any meaningful legislation if we continue to work like this.”

Earlier, NAHC President Val Kilimandaris discussed some of the organization’s efforts to address proposed Medicare reimbursement cuts of 3.5 percent over the next four years – a total decrease of 14 percent, happening “in spite of rising demand for home care and rising costs of care delivery.” Kilimandaris met with several members of Congress to lobby for reconsideration of the proposed changes in base payments, called re-basing. Members also spent a morning lobbying their representatives on the issue.

“There’s some momentum among Senate Democrats to change the proposed law,” he told the audience. “We’re looking at $22 billion in cuts and we’re not going to put up with it.” He promised attendees that NAHC would continue to apply pressure to ensure that home care could continue to meet the anticipated needs of aging baby boomers.

Home care and hospice are poised to play a key role in coming years, according to Kilimandaris. “I spoke with several senators who agree that we have to get more money into home- and community-based care so agencies and providers can invest in the technology and software that will increase the quality of care for patients,” he said.

Numerous forces are pushing care away from nursing homes and driving it toward home- and community-based care.“The demand is just going to be enormous for home care,” said  Bill Dombi, NAHC’s vice president for law, who accompanied Kilimandaris to the Hill. He said baby boomers won’t put up with being warehoused in nursing homes and lose their freedom when they need chronic or long-term care. “One way or another we’re going to have to come up with a way to finance more home care. Financing continues to be the major issue.”

Home care and hospice are driving much of the investment in health services as Americans turn away from nursing home care, according to NAHC. The shift from treatment to proactive monitoring in care, combined with technological advances means many more options for care providers and patients. Home health care is key player in successful patient-centered medical homes and in accountable care organization models, Dombi said.

According to NAHC, it costs Medicare nearly $2,000 per day for a typical hospital stay and $559 per day for a typical nursing home stay. Meanwhile, home care costs just $44 a day on average. It is not clear where they got the data, but comparisons of nursing home, assisted living, and some unskilled home care services can be estimated on a per-state basis through AARP’s long-term care costs calculator.

Note that this tool does not take skilled nursing care, or specific physical or mental health needs into consideration. It also does not take into account other expenses such as cost of food, heat, transportation or other skilled or semi-skilled care which account for some of the higher institutional care figures.

The bill would allow Medicare to pay for home health services provided by nurse practitioners and clinical nurse specialists working in collaboration with physicians, certified nurse-midwives or a physician assistant under a physician’s supervision. The bill is currently in the subcommittee on health. It’s not clear when or if it will be brought to the floor. An identical bill is working its way through the Senate  and NAHC officials are optimistic that legislation will move ahead.