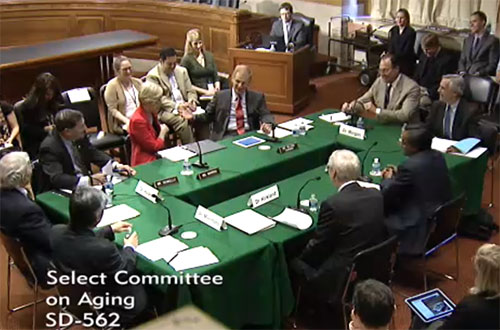 Leaders of some of the top aging research programs in the U.S. discussed the challenges and frustrations surrounding aging research on Tuesday during the Senate Special Committee on Aging Roundtable on “Tackling Diseases of Aging: Why Research Collaboration Matters,” which was broadcast online. Committee Chairman Sen. Bill Nelson (D-Fla.), convened the session, which focused in part on the emerging field of geroscience.

Geroscience attempts to bridge the gap between the fundamental biological processes that underlie aging and clinical work on aging-related disease and disability. Twenty divisions within the National Institutes of Health and the Gerontological Society of America are working within a gerontological research interest group to develop cross-disciplinary research recommendations to advance geroscience, said Richard Hodes, M.D., director of the National Institute on Aging.

Key research areas in which the basic biology of aging is believed to affect multiple disease processes include inflammation, adaptation to stress, metabolism, epigentics, macromolecuar damage, proteostatis, and stem cells and regeneration.

“These seven topics represent only a slice of the broad and rich field of geroscience. We anticipate that the discussions will energize the field to develop the studies that will lead to a systems level understanding of the relationship between aging biology and susceptibility to disease,” Hodes said. “In turn, this may facilitate the identification of new interventions that prevent or treat multiple diseases and disorders by addressing aging as a single underlying risk factor, thereby increasing both lifespan and healthspan in humans.”

In the spirit of fostering collaboration and preventing disruptive competition, the Mayo Clinic Kogood Center on Aging is leading implementation of a Geroscience Network that involves 10 other leading aging centers across the nation, said James Kirkland M.D., Ph.D.,, director of the Center. The goal is to enhance healthspan through better coordination of areas of focus among aging centers.

This will minimize duplication of effort, develop joint research protocols, curricula, clinical trials subject populations and clinical trials networks, and support faculty and student exchanges among centers. Links to a network of seven additional aging centers in Europe are being developed, Kirkland said. The National Institute on Aging is providing some financial support for this initiative, but he did not disclose how much.

It is now widely appreciated that our ability to enhance our quality control systems may have profound benefits to our cellular health, lifespan, and the prevention of some of the most devastating diseases, according to Richard Morimoto, Ph.D.,a professor in the Department of Molecular Biosciences and director of the Rice Institute for Biomedical Research at Northwestern University. As the worldwide aging boom continues, there will be what he called “an inevitable explosion” in neurodegenerative diseases, population ages, With this demographic shift will be the inevitable explosion in neurodegenerative diseases, dementia, cancer and metabolic diseases such as adult onset diabetes.

He said that without new drugs or treatments for age-associated degenerative diseases, it seemed fruitless for anyone to know that they are at risk. However, it is essential to have biomarkers that detect changes in quality control that predict enhanced risk for age-associated disease. “Either alone will be insufficient, so we must find ways to advance both approaches simultaneously.”

John Alam, head of Therapeutic Strategic Area for Diseases of Aging at pharmaceutical manufacturer Sanofi-Aventis, admitted that chronic diseases associated with aging posed significant challenges for clinical researchers. While therapies exists which target symptoms, those that address underlying causes of diseases and conditions remain elusive, he said. This leads to increasing disability and morbidity, while health care costs continue to rise.

The distinction between geriatric syndromes and what is considered “normal” aging and disease are less than in illnesses experienced in younger populations, often because dysfunction is often subtle and spread across multiple organ systems. To address this, Sanofi created a  research and development area that integrates the scientists working on major aging-related disease syndromes.

He called for policy changes in an outside of government, moving away from traditional structures. “For example, the regulatory process and framework for novel drug development, as well as the treatment paradigm in clinical medicine, is very much based on assumptions of frank disease with a clearly definable disease process and cause that can then be addressed with a specific medicine. And again, geriatric syndromes such as frailty do not follow such direct rules and principles,” Alam commented.

David Morgan, Ph.D., director of the Byrd Alzheimer’s Institute at the University of South Florida warned that government budget cuts are having a profound effect on aging research. “It has clearly diminished the capabilities of many centers engaged in such research. Both across the board cuts to existing grants and reduced funding rates for new grants have a discouraging impact, particularly on the next generation of researchers,” he said.

A number of laboratories have increased their activity in contracts with industry and grants from private foundations, but these cannot fill the void left by reduced support from the NIH, Morgan said. Some investigators have either closed their laboratories or, in some cases, returned to their home countries due to a better funding environment than in the US. “There are millions of American suffering from chronic degenerative disorders today. Ignoring them would be very challenging and a little heartless,” he told the panel. While many current benefits into aging research are still theoretical, he said that future generations will certainly benefit from interventions to extend healthspan which will not only extend their years, but the quality of their years.

In what can only be described as an awkward, didn’t-do-the-homework-moment, a late-arriving Sen. Elizabeth Warren, who is a member of the Senate Aging committee, was mistakenly welcomed as Sen. Susan Collins, the ranking member of the committee, by panel chair Dr. Michael Hodin, executive director of the Global Coalition on Aging. Nelson quickly corrected the error, noting that Collins could not attend due to a scheduling conflict.

The hearing was held in advance of the summit on “Advances in Geroscience: Impact on Healthspan and Chronic Disease,” that features a plenary launched by NIH director Francis S. Collins, M.D., Ph.D., and sessions on inflammation, adaptation to stress, epigenetics and regulatory RNA, metabolism, macromolecular damage, proteostasis and stem cells and regeneration. Watch the #agingsummit hashtag on Twitter for updates.