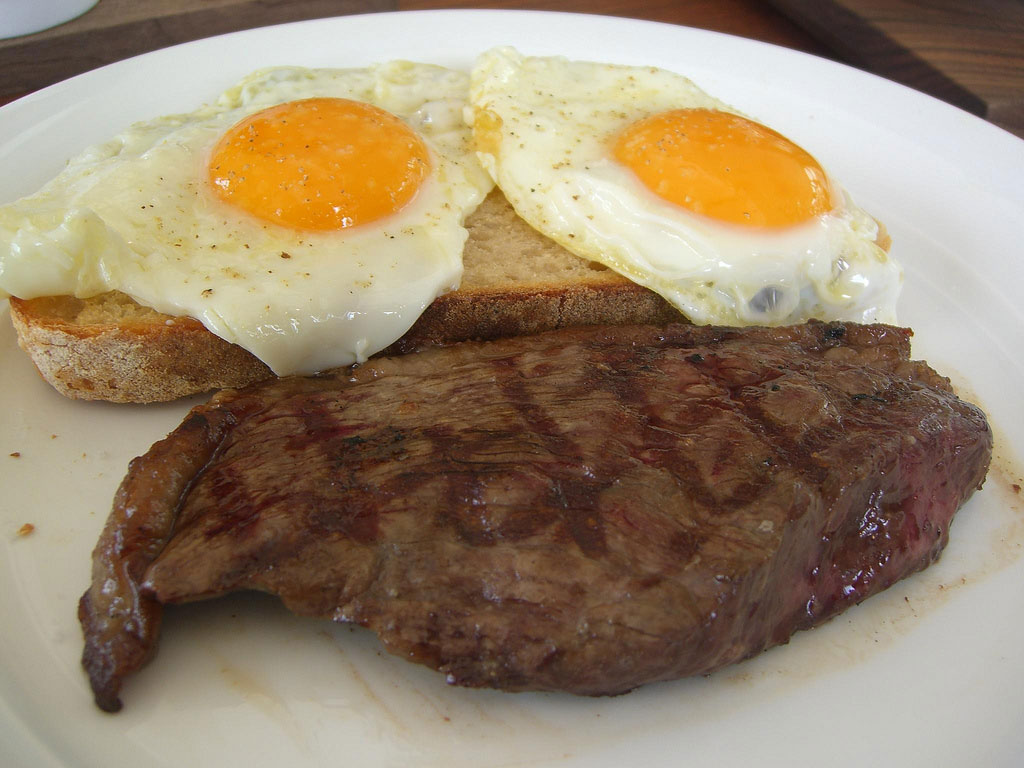 Is it just me, or do medical journals seem to have a knack for publishing conflicting findings on the same topic within the very same week?

That’s what happened earlier this month when the journal Nature Medicine published a fascinating paper that linked a chemical plentiful in red meat, l-carnitine, to the acceleration of atherosclerosis in mice. Researchers also found convincing evidence that when l-carnitine is converted into another chemical, called TMAO, by gut bacteria it may also be linked to heart disease in people. (For an engrossing account of these experiments and the science behind them, check out Gina Kolata’s story for The New York Times.)

The paper, in the Mayo Clinic Proceedings, explained that l-carnitine – a compound that helps the body turn fatty acids into energy – is depleted after cardiac events. It turns out doctors have been exploring its role as a treatment for heart disease since the 1970s. The new study was a systematic review of 13 trials in which doctors gave 3,629 patients l-carnitine or a placebo after a heart attack and then followed them to see how they fared. The review found l-carnitine was associated with a 27 percent reduction in deaths, a 65 percent reduction in irregular heart rhythms called arrhythmias, a 40 percent reduction in chest pain and it seemed to heal some of the heart tissue that had lost blood flow during the heart attack. Reductions in second heart attacks and cases of heart failure were not statistically significant.

That second study got little notice next to the splashy news that gut microbes may play a role in heart attack risk. There are good reasons, both cultural and scientific, that it didn’t.

Gut microbes are having a moment. As a culture, we’re captivated with the idea that the bacteria that live inside us play a role in our health. Probiotics are hot. Actress Jamie Lee Curtis talks fondly of her digestive health in commercials for yogurt.

And the two studies looked at l-carnitine in completely different contexts, before and after heart attack. Extra amounts of nutrients often turn out to be useless or even harmful when the body already has enough. Taking supplements is sometimes helpful, however, when the body is deficient.

So I’m not saying these studies deserved equal notice. But the second study, which threw l-carnitine into a completely different light, should have at least made us a little more curious about context surrounding these new experiments.

In addition to the surprising idea that gut microbes may play a role in heart disease risk, does the new finding fit with what we already know about nutrition and health?

Helpfully, a few reporters, like Daniel Pendrick, executive editor of Harvard Men’s Health Watch, paired the two studies to try to put all the news about l-carnitine and red meat in context:

He also reminded readers of a large systematic review and meta-analysis – a study of studies – which pooled the best available evidence on the connection between heart disease and red meat. That study, which was published in the journal Circulation in 2010, found that, overall, red meat was not associated with heart disease. A closer look at the data revealed that heart disease risk seemed to be most closely tied to processed red meats like bacon, hot dogs, and deli meats. Every 50-gram daily serving of processed red meat – the equivalent of about two slices of bacon – raised a person’s risk for heart disease by about 42 percent and their risk of diabetes by about 19 percent. There wasn’t any increase in risk seen with unprocessed cuts like steaks and chops.

Does that mean l-carnitine is in the clear? Probably not.

“Based on the Nature Medicine study, I’d be concerned about taking L-carnitine supplements,” said Dariush Mozaffarian, M.D., associate professor of medicine at Harvard-affiliated Brigham and Women’s Hospital. “There was no strong reason to take such supplements before the study, and now this well-done study suggests there may be harm. I would definitely think three times before taking an L-carnitine supplement.”

Got that? Some kinds of red meat may not be bad for the heart, and l-carnitine in supplements may not be the best idea, at least for people who aren’t recovering from a heart attacks.

Wait … This just in … a new study in the New England Journal of Medicine has linked egg yolks and their fatty nutrient, lecithin, to TMAO and heart attacks. Rob Stein did a nice write-up to the study for NPR’s Shots blog.

Before we take eggs off the table, though, it’s worth noting that previous studies, including a meta-analysis published in the BMJ in January, have found that moderate consumption doesn’t seem to increase the risk of heart attacks and strokes.