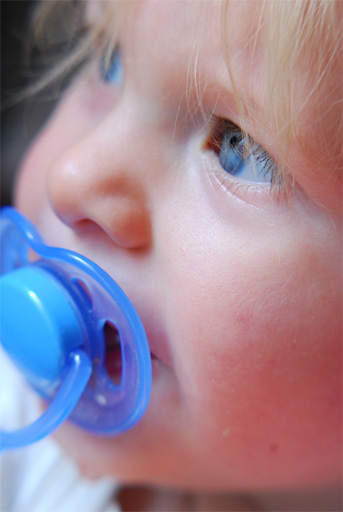 Photo by The Adventures of Kristin & Adam via Flickr

Dental folks collectively caught their breath when they heard about the study, just published in the journal Pediatrics.

In a May 6 story for National Public Radio, reporter Rob Stein explained the findings. He started out by talking with a typical mom who described washing her child’s pacifier when he dropped it, even cleaning it in boiling water if it fell “somewhere particularly gross.”

But, then Stein went on to say “there’s a theory that says: That may not be the best way to go. That sterilizing that pacifier may actually have a big downside. To try to find out, Bill Hesselmar, of the University of Gothenburg in Sweden, and his colleagues, studied 184 babies who used pacifiers and their parents.

BILL HESSELMAR: We asked them how they cleaned the pacifier, if they rinsed them in water, and of course most of them did.

STEIN: But a lot of the parents did something else.

HESSELMAR: They put it in their mouth, sucked on it, and then gave it back to the children. It’s a quite common way to clean pacifiers.

STEIN: The researchers then kept checking back to see if there were any differences between the kids whose parents licked their pacifiers clean, and those who didn’t. And in this week’s issue of the journal Pediatrics, they report a striking difference.

HESSELMAR: Those parents who sucked on their child’s pacifier and then gave it back to the infant, these infants had less eczema.

STEIN: A lot less eczema. And they were also less likely to develop another condition caused by allergic reactions: Asthma. Hesselmar says scientists think they may know why. It’s because parents expose their kids to bacteria, harmless bacteria, we all carry around in our mouths….

But wait, cried dental people. The disease known as dental caries, which causes tooth decay, is caused by a transmissible microbial infection. The bacteria in parents’ mouths are not all harmless after all.

“Drop Those Pacifiers!” read the press release that quickly followed  from the American Dental Association: “ADA Says Saliva Harbors Cavity-Causing Bacteria that Can Be Transmitted to Babies.”

“Parents should be aware that bacteria that cause dental decay can be transmitted from adult to child by sharing eating utensils, or by the parent sucking on a baby’s pacifier to clean it,” the ADA warned, contending the Pediatrics study touting the immunological benefits of adult saliva “does not provide the full picture that adult saliva may also contain bacteria that causes decay.”

“Licking a pacifier, as promoted in the study, can transfer the cavity-causing bacteria from the parent to baby, increasing the possibility of tooth decay as they grow.

“A child’s teeth are susceptible to decay as soon as they begin to erupt,” said Jonathan Shenkin, D.D.S., M.P.H., a pediatric dentist in Maine and a pediatric dental spokesperson for the ADA.

“Cavity-causing bacteria, especially Streptococcus mutans, can be transferred from adult saliva to children, increasing their risk of getting cavities.”

Shenkin went on to offer measures that parents can take to help children develop a healthy immune system.

“Breast milk is widely acknowledged as a good immunity-builder as well as the most complete form of nutrition for infants. This is something on which both the ADA and the AAP agree,” he said.