Laurence Hammack is a reporter at The Roanoke (Va.) Times. He is attending Health Journalism 2013 on an AHCJ-Rural Health Journalism Fellowship, which is supported by the Leona M. & Harry B. Helmsley Charitable Trust.

View all posts by Laurence Hammack → 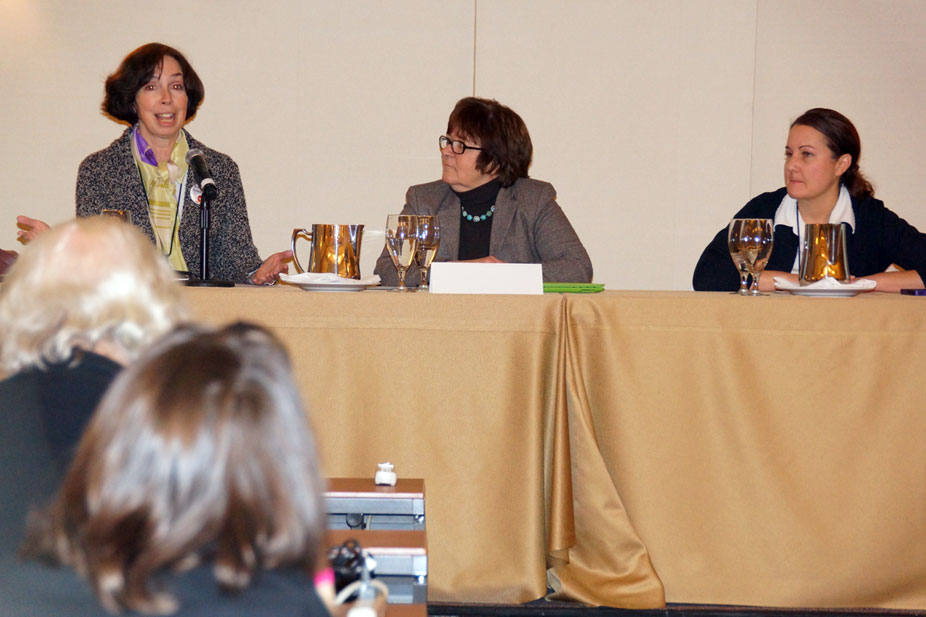 Photo by Pia ChristensenJournalists Irene Wielawski, Peggy Peck and Blythe Bernhard offered advice that included explaining to readers when a reporters’ access to experts or officials is less than optimal.

You’re on a tight deadline, and your source will only take questions by email. A public information officer insists on sitting in on one of your interviews. You’re asked to let someone review a quote before it appears in print or online.

What to do? Those were some of the questions addressed during a roundtable discussion led by three members of AHCJ’s Right to Know Committee at Health Journalism 2013.

Many times, the answer boiled down to this: It depends on the circumstances, but always try to explain those circumstances to your readers.

“When you grant an email interview, you give some editorial control to your source,” Bernhard said. “You allow them to control the conversation, and you’re not able to ask follow-up questions.”

Sometimes you have to settle for email interviews. But Bernhard offered a few tips on how to avoid them: Always name the PIO who insists on the format, and mention how many phone calls went unreturned. “They hate having their names in the story” under those circumstances, and might reconsider their policy in the future, Bernhard said.

And always explain to your readers that an email interview was the only option.
“Let people know we’re working hard to get the truth and we’re not just regurgitating press releases,” Bernhard said.

Another panelist, MedPage Today Editor in Chief Peggy Peck, suggested that maybe it’s a story if a state agency has a long-standing practice of only taking questions by email.

“Do a piece about ‘Is the public being barred from information?” Peck said. “That seems to be a great story.”

Peck said reporters at MedPage do not allow sources to approve quotes. When a PIO insists on sitting in on an interview, the policy is to spell that out in the story, with the name of the person who set the conditions.

“I think these are very basic rules, and if we stick to them we are not challenged,” Peck said.
The third panelist, independent writer Irene Wielawski, offered a different view.

“I don’t believe in rules, because I think so much of journalism is fluid and so much requires judgment in the field,” said Wielawski, one of the founders of AHCJ.

For example, Wielawski said she might read quotes back to a patient who has never dealt with the news media. “I ask them again and again, ‘Are you comfortable with strangers reading this?’”, she said.

With long-form journalism, she said, a year could pass between the time of the interview and the publication date. That makes it important to call sources back and review the quotes to make sure nothing has changed in the interim, she said.

While different circumstances and varying deadlines often led to different answers to the access questions raised during the discussion, Peck had this universal tip for reporters who encounter obstacles to the facts:

“All of us just have to keep holding their feet to the fire,” she said. “Because it is enormously tough.”

Laurence Hammack is a reporter at The Roanoke (Va.) Times. He is attending Health Journalism 2013 on an AHCJ-Rural Health Journalism Fellowship, which is supported by the Leona M. & Harry B. Helmsley Charitable Trust.