Let’s just say right from the start that Atul Gawande’s recent story in The New Yorker about runaway health costs in McAllen, Texas, is a tour de force of explanatory journalism.

There is, thankfully, still a lot of good journalism being committed in this country. So what made Gawande’s article spread like wildfire? Kaiser Health News rounds up some insights on the power of the piece and tips for reporters who’d like to do the same thing.

Make the abstract real. Gawande’s article cites lots of facts and figures but leads the reader through the health-cost thicket with concrete examples and personal stories. Gawande’s article makes “it so real that people who are elected public figures can talk about this issue to anyone they meet,” says Robert Blendon, a Harvard health policy prof.

Mine the data. University of Minnesota’s Gary Schwitzer says you can do it, too. “No matter where you live in this country, there is a story in the Dartmouth Atlas data” showing variations in health spending. The story “didn’t require breaking news, a new study or new data” to be powerful, Schwitzer says. “Health reporters spend too much time thinking about breakthroughs, cures and new stuff, and not enough on access, disparities and variations in policy.”

Remember balance. The Kaiser roundup also includes criticism of the article. “Even though a lot of what he said was true, there’s a lot that he didn’t say that would actually balance the story,” says E. Linda Villarreal, past president of the Hidalgo-Starr County Medical Society. 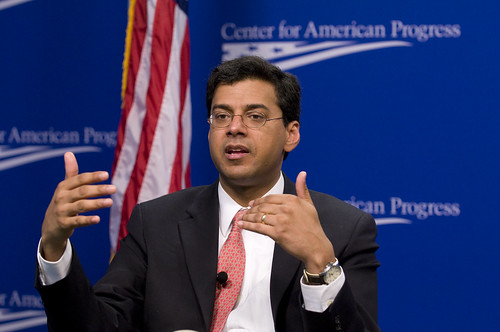 Dr. Atul Gawande, from Center for American Progress via flickr

2 thoughts on “Why health costs in McAllen, Texas, resonate”