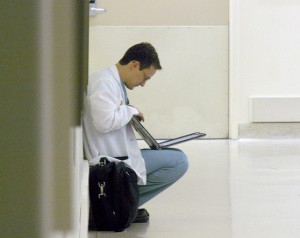 It’s well known that Google, Facebook and dozens of other companies mine the browsing histories of their users and use that data for advertising. But imagine what we might learn if we homed in on the browsing history of medical students browsing clinical research sites during their studies?

The Washington Post‘s Ibby Caputo reports that the National Institutes of Health, upon realizing that more folks are looking for health information online and that many of those folks are ending up on Wikipedia, has started to teach its scientists how to create and edit Wikipedia entries.

Rather than trying to compete with the free online encyclopedia, NIH seems to have chosen to embrace the inevitability that users will turn to Wikipedia for health advice. If they’re going to go there anyway, then NIH is at least going to try to make sure they’re getting the best possible information.

To this end, the NIH and the Wikimedia Foundation (the nonprofit which publishes the encyclopedia) hosted a workshop attended by about 100 NIH scientists this month in which they learned how to edit and even create Wikipedia entries.