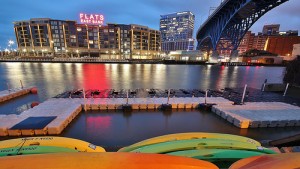 Cleveland March # 49 via photopin (license)#AHCJ16 in Cleveland includes a key discussion with the top health leaders from Cleveland, Baltimore and St. Louis on cities’ health challenges, one of several sessions looking at health disparities.

There’s no shortage of good panels at this week’s Health Journalism 2016 in Cleveland, especially for reporters interested in social factors that impact health. I’m particularly excited about an opening day roundtable discussion with top health officials from Baltimore, St. Louis and Cleveland that will focus on urban health challenges.

Before you join us at “Covering the health angles of cities facing crisis,” which runs from 6 p.m. to 7:30 p.m. on Thursday, April 7, here’s a quick look at recent coverage of some of the major health issues in each city: END_OF_DOCUMENT_TOKEN_TO_BE_REPLACED

The Detroit News‘ Nathan Hurst reports from D.C. on the Healthy Food Financing Initiative, proposed legislation that would commit between $400 million and $1 billion dollars to “building and improving stores where access to fresh food is limited.”

It’s modeled on a Pennsylvania program which provided start-up costs to grocery stores that promised to offer fresh food in low-to-moderate-income areas which didn’t yet have adequate access to such things. Detroit is the sort of city that would benefit most from a boost in urban groceries, Hurst writes.

Carr said the prospect of federal subsidies to increase the number of grocery stores could be a boon to a city where large areas for years have had limited access to fresh produce and meats. In 2003, a University of Michigan study showed Detroit could easily support 41 large supermarkets — which measure more than 40,000 square feet — but at the time had only five with more than 20,000 square feet, and at least two of those have closed since the study was done.

How do these food deserts emerge in the first place? The Cincinnati Enquirer‘s Laura Baverman explains by looking into that city’s shrinking grocery selection. Baverman explores several contributing factors, including a lack of the huge lots preferred by big box stores, booming suburbs and struggling independent stores, but in the end she comes back to brutal economic reality:

“You don’t get the sales levels in the inner city that you do out in the suburbs,” said Matt Casey, president of Matthew P. Casey & Associates, a New Jersey-based grocery industry consultant. “You tend to have a lower-income customer base, so they’re not spending as much. They don’t make the impulse buy.”