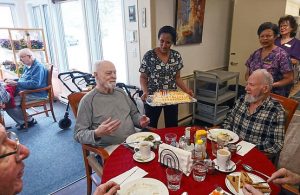 Millions of older adults struggle to make ends meet. They’re often faced with nearly impossible choices — food or medication; rent or a doctor visit. Some 9.2% of older adults were considered poor in 2017, according to the official poverty rate.

That’s an income of less than $11,756 per year to meet basic costs for food, housing, health care and transportation. Using a more realistic Supplemental Poverty Measure, even more older adults are considered poor, according to the Kaiser Family Foundation. END_OF_DOCUMENT_TOKEN_TO_BE_REPLACED

Not surprisingly, she finds matches. Of the top 10 prescribers, Jewett writes, “Three of them accepted $20,000 or more in educational or speaking fees from the company that makes the drug they prescribe to Medi-Cal patients.” Of those, the most remarkable are a duo who share an office near San Diego:

Samuel Etchie prescribed Seroquel more than 1,000 times in 2009 at a cost of $449,000 to the state, according to Medi-Cal records collected by the ProPublica news organization and provided to California Watch. The drug’s maker paid him $25,350 this year to speak to health professionals.

Etchie did not return two calls to his office.

John Allen, who shares an office with Etchie, was among the state’s top prescribers of Zyprexa, also an antipsychotic drug. Allen dispensed 418 prescriptions at a cost to the state of $346,569. This year and last, the drug’s maker, Eli Lilly and Co., paid him about $27,000 to educate other medical professionals.

The icing on the cake? A quote from Allen:

“I think it’s unfortunate that there’s an implication in articles that we’re robots for drug companies,” Allen said. “We have to have our own experience with medications and find out what works best. We’re not 5-year-olds in front of TV watching cereal and toy commercials.”

Voice of San Diego’s Randy Dotinga explains exactly how the fear of H1N1 has transformed every step of the health care delivery process in the Southern California city, which has been hit particularly hard by the virus. Dotinga focuses on how paramedics’ routines have changed. “To protect themselves,” Dotinga writes, “paramedics are essentially using the same precautions they would against infectious tuberculosis – something they hardly ever see.”

Dotinga says the changes become evident as soon as the paramedics arrive on the scene. Before H1N1, they’d walk right up to the patient. Not anymore.

Now, paramedics across the county adhere to a “Six-Foot Rule” when they suspect a patient has a respiratory illness. “If you’re six feet away even without your protective equipment for a short period of time, you’re not likely to get infected,” said Haynes, the county official.

If a patient has possible flu symptoms, the paramedics put on N95 respirators. They began wearing the respirators instead of ordinary masks about a month ago. Paramedics will put on eye shields too. Many paramedics hate to wear them, and forget to put them on.

In this environment of extreme care, not even the ambulances are left to go on as usual. These days, in addition to their regular regimen of extreme sanitation, they visit a nearby fire station a few times a month. There, they are nailed with a super-powered germicidal fog that ensures no microbes, nefarious or otherwise, are going to linger for long.

Does the six-foot rule really work? What about masks?

Maybe. Your view of the effectiveness of social distancing likely depends on where you stand on a particularly contentious issue: airborne vs. droplets. If influenza is spread primarily through droplets (as the CDC says it does here, and here), then it’ll have a tough time spreading beyond three feet unless it’s smeared on a surface. In this case, then, the six-foot rule is an effective way to slow the spread of the virus, as are masks.

If, however, you believe the virus is airborne then it would be able to cross the six-foot gap and you would need, at the very least, an N95 respirator (a mask which filters out at least 95 percent of airborne particles) to protect yourself. In this case, though, it’s important to note that according to some recent research, an N95 won’t offer any more protection than a regular mask.

According to the Institute of Medicine, we haven’t yet heard the final word on influenza transmission and further research is required (PDF). In the meantime, most providers are erring on the side of caution. Check out AHCJ’s primer on controlling pandemic flu for further information.

(Hat tip to AHCJ board member Maryn McKenna for pointing us in the right direction.)

In the last 16 years, three people on the San Diego State University campus succumbed to a rare form of brain cancer. They all worked in the same room. Randy Dotinga investigated what some are calling a “cancer cluster” for voiceofsandiego.org. Dotinga also answered frequently asked questions about the situation and cancer clusters in general.

School officials aren’t investigating the cluster, Dotinga said. According to Dotinga’s story, “those who study cancer clusters say there’s a good chance that nothing is wrong. Suspicious statistics, they say, are sometimes just a random fluke.”

The room, NH 131 in Nasatir hall, is currently used by graduate students as a meeting and study area.

With the exception of workplaces like factories and mines, “our batting average as epidemiologists in explaining cancer clusters. … has been very poor,” said Dr. Raymond Neutra, former chief of the state Division of Environmental & Occupational Disease Control.

Still, faculty members want more action. “I’m certainly not panicked about it, but we think questions should be asked,” said Brian Adams, an associate professor of political science. “With that high of a number (of cancer cases), dismissing it as being a likely coincidence probably isn’t the wisest path.”

The two professors in question, aged 69 and 49, and the graduate student, 26, all spent time in the room and developed cases of glioblastoma multiforme brain cancer, The Daily Aztec student newspaper reported Monday. Another professor who worked in the room is said to be suffering from another kind of brain cancer.