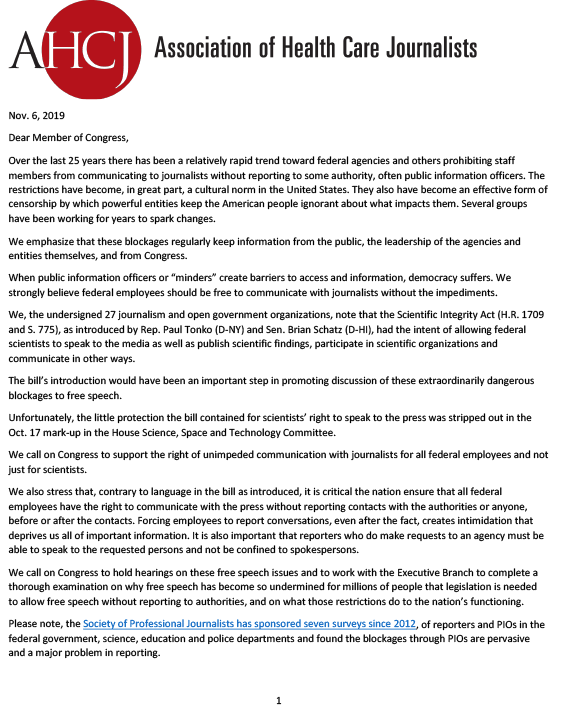 Click here to see the letter sent to Congress.

The Association of Health Care Journalists has joined the Society of Professional Journalists and 25 other journalism and open government groups in urging every member of Congress to support unimpeded communication with journalists for all federal employees.

“It is essential to public welfare and democracy that this issue is addressed. Not allowing experts to speak freely to reporters is authoritarian and keeps sources from explaining a variety of things that are the public’s business,” the groups say in a letter sent to Congress members today.

“This ‘Censorship by PIO’ works in tandem with other assaults on free speech including restrictions on public records, threats and physical assaults on reporters, prosecution of whistleblowers and threats of prosecution against reporters.”

Many groups in the coalition of organizations have been working for several years to spark changes in the restrictions put on federal employees and the lack of freedom to speak to journalists. For more than a decade, AHCJ’s Right to Know Committee has pressed federal officials to improve journalists’ access to federal experts.

Reporters facing unreasonable delays or inadequate responses from media officials at an agency of the U.S. Department of Health and Human Services (HHS) can bring their complaints to one of three deputy assistant secretaries for public affairs.

In a phone conference on Wednesday between top HHS media officers and AHCJ board members, these officials were named as contacts for reporters having difficulties. Their names and the agencies whose media offices they oversee are listed below.

The phone conference was one in a regular series in which leaders of AHCJ’s Right to Know (RTK) Committee work with the HHS public affairs office to improve government transparency and access to information and experts.

MedPage Today, an online breaking-news service for physicians, today instituted a rule requiring reporters to inform readers whenever a press officer has listened in on an interview.

“If a source’s comments are monitored by a press officer, then the person may not have been speaking freely,” said Peggy Peck, vice president and executive editor. “That’s information readers should have.”

Peck instructed her staff to use phrases like “said in a telephone interview that was monitored by a public information officer” whenever using quotes from such an interview.

Peck emphasized that a reporter’s goal should be to avoid having a press officer listening to calls or attending face-to-face interviews. “But if that is the only way a researcher will talk, we need to let our readers know that,” said Peck’s memo to eight reporters.

Peck is a member of AHCJ’s Right-to-Know Committee, and the rule sprang from the committee’s work to end interference by public information officers in newsgathering, especially in the federal government.

“I applaud MedPage Today for taking this step and encourage reporters and editors everywhere to follow suit,” said Felice J. Freyer, chair of the Right-to-Know Committee and a member of AHCJ’s Board of Directors.

“Reporters have come to accept the presence of public relations people at interviews, but it’s really not acceptable. We all know that such eavesdropping hinders the free flow of information – and we need to let our readers know that this is happening.”

AHCJ is seeking input from reporters about their experiences obtaining information from the federal government. “If you’ve given up trying to reach federal officials because of past delays and obstacles, we want to hear about that too,” Freyer said. Please send your comments to felice.freyer@cox.net.

Freyer would like to clarify that, in her quote above, “monitoring” would be a more accurate description of public relations staff sitting in on interviews because journalists are typically aware when PIOs are present.

AHCJ also is looking for positive experiences or examples in which relationships between journalists and press officers work well. Send those examples to felice.freyer@cox.net.