September is Prostate Cancer Awareness Month. Prostate cancer is the most common cancer among men in the United States, after skin cancer. It is also the second leading cause of death from cancer in men. Data from the National Cancer Institute show that prostate cancer occurs more often in African-American men than in white men and that African-American men with the disease are more likely to die from it than their white counterparts. 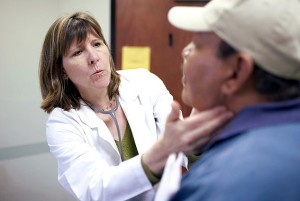 Finding and treating prostate cancer before symptoms occur may not improve health or help men live longer; nor does every diagnosis warrant intervention. In 2012, the U.S. Preventive Services Task Force recommended against routine prostate-specific antigen (PSA)-based screening for prostate cancer, concluding that the expected risks of PSA screening are greater than the potential benefit. These risks include false positives that can lead to unnecessary treatment, with serious side effects for what is typically a very slow-growing disease. END_OF_DOCUMENT_TOKEN_TO_BE_REPLACED

Senators Barbara Boxer (D-Calif.) and Jeff Sessions (R-Ala.) have introduced the National Prostate Cancer Council Act, which would establish a body made up of federal agencies, patients, and medical experts. It would coordinate prostate cancer research and services across all federal agencies.

In a press release announcing the legislation, Sessions said, “Testing and early detection are the keys to combat this disease. When identified early, the survival rate for prostate cancer is very high. We need to ensure that we have the most advanced screening tools available and this legislation is a step in the right direction.”

The National Cancer Institute estimates there will be 233,000 new cases of prostate cancer and 29,480 deaths in the U.S. this year. END_OF_DOCUMENT_TOKEN_TO_BE_REPLACED

The ECRI Institute’s new review of recent research on the utility of off-label prescription of Finasteride in the prevention of prostate cancer (PDF) presents research and clinical guidelines. Its bibliography and research review may be useful for anyone considering a follow-up to Gina Kolata’s recent New York Times piece on cancer prevention. Finasteride blocks an enzyme that aids the proliferation of prostate cancer cells. It’s used to reduce the size of enlarged prostates and, under the name Propecia, to treat male pattern baldness.

A large trial on finasteride, known as the Prostate Cancer Prevention Trial (PCPT), was published in 2003. The 18,882 men (asymptomatic, with normal PSA levels, 55 years of age or older) enrolled in the trial were randomly assigned to receive either finasteride or placebo for 7 years. … The authors of the trial reported that finasteride reduced the incidence of prostate cancer from 24.4% to 18.4%; however, the incidence of high-grade prostate cancers was 25.6% higher in the finasteride group than the placebo group. The clinical significance of these findings is unclear and has been widely debated.

The ECRI release was prompted by Kolata’s piece in The New York Times which questions why drugs that have been proven to prevent cancer are not being taken while many potentially harmful (and useless) supplements are. Kolata mentioned the Finasteride case in addition to similar examples involving breast cancer prevention drugs.

According to its Web site, the nonprofit ECRI Institute “dedicates itself to bringing the discipline of applied scientific research to healthcare to discover which medical procedures, devices, drugs, and processes are best to enable improved patient care.” The acronym ECRI has been adopted as the organization’s full name, but used to stand for “Emergency Care Research Institute.”