It’s inevitable that when any organization publishes a report card on physician quality, doctors and policy experts will critique its methodology. Therefore, ProPublica surely is not surprised see criticism of the extensive work that Sisi Wei, Olga Pierce and Marshall Allen did sorting through Medicare billing records for 17,000 U.S. surgeons at 3,575 hospitals who performed eight types of surgery from 2009 through 2013. The analysis formed the database of the nonprofit newsroom’s Surgeon Scorecard launched in July. (We covered the scorecard here: Surgeons’ complication rates become public with new database.) 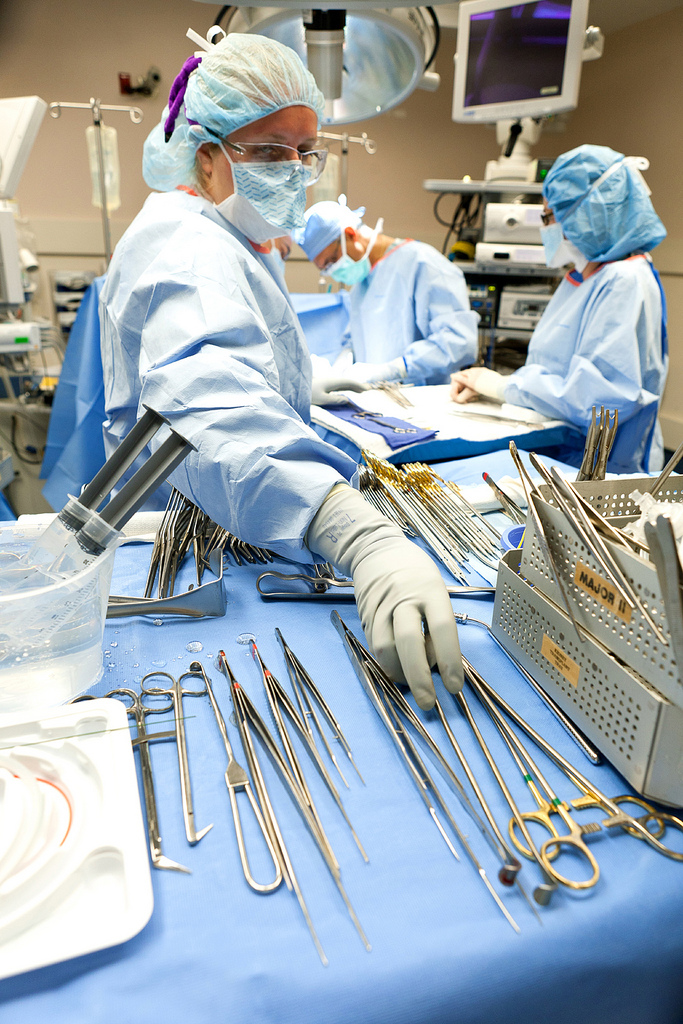 The latest criticism comes from the Rand Corp. In a 19-page report issued today, A Methodological Critique of the ProPublica Surgeon Scorecard, nine Rand researchers say their critique had three goals: to explain issues they have with the scorecard’s methodology; to suggest ways to improve the scorecard; and to inform the public about these issues. By informing the public, the researchers said in their Sept. 25 critique, “…we hope patients who are choosing a surgeon will be better able to decide how much weight to give the data presented in the scorecard.”

In producing an online, searchable database for the public, ProPublica’s goals are laudable, the researchers said, but the scorecard’s ability to achieve its goals is limited by the rigor of the methods and the adequacy of the underlying data. They point out five specific issues they have with the methodology, and outline six ways to improve the scorecard. END_OF_DOCUMENT_TOKEN_TO_BE_REPLACED

For the first time, reporters anywhere in the country can search nursing home inspection reports online and see how often common problems pop up.

Thank you, ProPublica, for creating Nursing Home Inspect. It’ll make our jobs much easier, and be a valuable source of story ideas for many months to come.

Included at the moment are more than 20,000 reports from government inspections of 14,565 nursing homes, most since January 2011. The database will be updated monthly, ProPublica says, and that will make it even more helpful as time goes on.

Deficiencies are noted when nursing homes are unclean or unsafe, or when staff harm elderly or disabled patients, or give medication inappropriately, or violate other standards of care. (These are just a few examples; there are many, many more.) Grades are awarded depending on the seriousness of the problem observed, with “A” being the least severe and “L” the most severe.

The inspection reports were posted online by the government in July – a first-of-its-kind public disclosure – but not in a format that made it possible to search them by keywords, cities, or nursing homes’ names. That’s where ProPublica’s new app comes in. Charlie Ornstein of ProPublica has written up helpful tips on using the database.

Reporters might want to begin by seeing which nursing homes in their city or state have been cited for deficiencies deemed most egregious, those with a letter grade of “K” or “L.” These are the facilities you might want to focus on if you were doing an investigation. (You’d surely want to know, however, if the problems identified persisted over time, and that kind of information isn’t yet available via ProPublica. To get it, you’ll have to ask government regulators to let you look at previous inspection reports.) END_OF_DOCUMENT_TOKEN_TO_BE_REPLACED

Following up on reporting efforts from the Milwaukee Journal Sentinel/MedPage Today and ProPublica, a Senate committee has launched investigation into the pharmaceutical industry’s conflict-of-interest-laden promotion of pain management drugs, one of which may or may not be related to one pharma-tied patient organization’s Tuesday announcement that is was closing up shop “due to irreparable economic circumstances.”

Thus far, the investigation has consisted of strongly worded rebukes and requests for further disclosure to the abovementioned American Pain Foundation, among others, in the form of letters from Sens. Max Baucus and Charles Grassley. PDFs of the relevant letters can be found in this press release from Baucus’ Senate finance committee.

In the letters, the senators directly cite the investigative efforts of AHCJ members Charles Ornstein, Tracy Weber and John Fauber.

Ornstein, AHCJ’s board president, and Tracy Weber, his fellow ProPublica senior reporter, published their investigation into the American Pain Foundation in ProPublica and The Washington Post in December. As they write in their post on the foundation’s demise, “The group received 90 percent of its $5 million in funding in 2010 from the drug and medical-device industry, ProPublica found, and its guides for patients, journalists and policymakers had played down the risks associated with opioid painkillers while exaggerating the benefits.”

Fauber’s reporting, the result of a partnership between the Milwaukee Journal Sentinel and MedPage Today, focused on the tangled web of money, organizations and influence through which the pharmaceutical industry helped propel the runaway growth of painkiller prescriptions over the past decade and a half.

In his report on the senate investigation he helped inspire, Fauber writes that the finance committee is “seeking financial and marketing records from three companies that make opioid drugs, including Oxycontin and Vicodin, and seven national organizations.” The legislators are seeking records of financial transactions between pharmaceutical manufacturers and patient groups from as far back as 1997, as well as details on any federal funding provided to the groups.

The results of a yearlong joint investigation of the American autopsy system by ProPublica, Frontline and NPR show that problems in the death investigation system throughout the country have led to innocent people being sent to prison, “allowed the guilty to go free and left some cases so muddled that prosecutors could do nothing.” When autopsies aren’t done, diagnostic errors go undetected and opportunities to learn more about medicine are lost.

One story of patient rights and legal wrangling sports the remarkable headline “Why Can’t Linda Carswell Get Her Husband’s Heart Back?” It hinges, among other things, on the simple fact that “Even though the Institute of Medicine has reported that medication errors affect an estimated 1.5 million patients per year, it is not typical to conduct toxicology tests as part of clinical autopsies. They are routine in forensic autopsies.”

Another piece takes a broader view, exploring the reasons behind and consequences of the fact that autopsies are performed on only about one in 20 patients who die in hospitals when, 50 years ago, the rate was one in two.

Hospitals aren’t required to perform autopsies – the Joint Commission hasn’t included autopsy rates in its accreditation process since 1971 – and neither Medicare nor private insurers reimburse hospitals for the procedures, which Allen found cost about $1,275 each. The implications of these financial disincentives, combined with related factors such as some physicians’ confidence that new diagnostic tools such as MRIs and CT scans provide such accurate results that they obviate the need for postmortem work, are far-reaching.

Diagnostic errors, which studies show are common, go undiscovered, allowing physicians to practice on other patients with a false sense of security. Opportunities are lost to learn about the effectiveness of medical treatments and the progression of diseases. Inaccurate information winds up on death certificates, undermining the reliability of crucial health statistics.

A 2002 review of academic studies by the federal Agency for Healthcare Research and Quality found that when patients were autopsied, major errors related to the principle diagnosis or underlying cause of death were found in one of four cases. In one of 10 cases, the error appeared severe enough to have led to the patient’s death.

Other stories in the project report that suspicious deaths of the elderly are rarely investigated and that the deaths of children “pose special technical challenges for forensic pathologists.”

At ProPublica, senior reporters Charles Ornstein and Tracy Weber have published the latest turn in their ongoing analysis of conflicts of interest, problem physicians and the disciplinary systems meant to reign them in. This time, they look at Medicaid in Florida and find at least three instances when the state “allowed physicians to keep treating and prescribing drugs to the poor amid clear signs of possible misconduct.”

Their piece revolves around those key examples – two of which were, in all seriousness, brought to their attention by a Scientologist-run watchdog website – and I strongly recommend you read the whole thing for the details. Below, I’ve just highlighted the bigger picture.

In general, Ornstein and Weber found, state Medicaid programs, as well as the federal Centers for Medicare and Medicaid Services, which doesn’t track relevant state data, have failed to act on information which seems to strongly indicate that certain physicians are abusing or exploiting state programs.

Medicaid programs across the country have long had evidence that physicians have been prescribing risky drugs in excess and perhaps to the wrong patients. These prescriptions also racked up huge bills for the programs.

But like Florida, many states did not act on that evidence. Last year, (Sen. Charles) Grassley demanded data from each state about its highest prescribers of pain pills and antipsychotics, and he asked state and federal officials to determine whether the prescriptions written by these doctors were legitimate.

The Online News Association has honored two of this year’s bumper crop of excellent health pieces with top honors in their respective categories at the 2011 Online Journalism Awards, with nods going to pioneering work by both ProPublica and The Washington Post.

For ProPublica, AHCJ member Robin Field’s examination of the nation’s Medicare-funded dialysis system and what this oft-overlooked federal budget item tells us about the implementation of “socialized medicine” in America earned the Gannett Foundation Award for Innovative Investigative Journalism in the Small Site category. Since its publication, Fields’ award-winning piece has continued to evolve, adding data and updates as they become available.

The other prominent health winner was The Washington Post‘s video-heavy “Traumatic Brain Injury: Coming home a different person,” which beat out another multimedia piece, the Los Angeles Times‘ Dylan’s Brain, in the large site category of the Multimedia Feature Presentation award.