One recent workday, I called my primary care physician’s office and immediately was transferred to voicemail. Usually, I’m perhaps the “fifth caller in queue,” or on a lucky day, the second caller. That day — probably because it was a Monday in winter and people were kicking off their week by calling the doctor — the perky robot voice told me that I was the 14th caller. I hung up, determined to call again later. END_OF_DOCUMENT_TOKEN_TO_BE_REPLACED 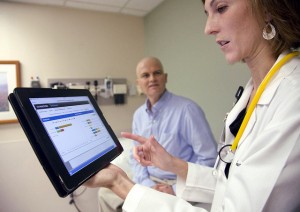 We don’t usually post two consecutive items by the same health care reporter on different topics. But when I was trying to double-check a link on the last item based on Bruce Japsen’s work, I stumbled on another interesting post by him. This one is about how health reform is encouraging primary physician pay to rise more quickly than that of specialists.

And the gap was even wider in the prior year. In 2012, he writes, “pay of primary care doctors, which include family physicians, internists and pediatricians (rose) more than 9 percent while specialist total compensation rose just 3.9 percent.”

This isn’t going to close the gap. But it clearly is telling us something about how the shift away from fee-for-service to value-based medicine is taking root. Primary care is often at the center of these new models, which emphasize coordination, prevention, management of chronic conditions, and team-based care. In addition, hospitals are hiring more primary care doctors to capture outpatient revenue – which is also part of the “value-based” picture. And there is a shortage of primary care physicians.

“It’s a buyer’s market,” Dr. Halee Fischer-Wright, a pediatrician and MGMA’s chief executive officer, was quoted as saying.  “Every system needs primary care physicians as they shift to value based care models.”

And that trend is likely to heighten amid the coming consolidation of health insurers who are pushing for more rapid transformation into value-based models.

We’ve posted a new tip sheet and a new “How I did it” piece that may yield some story ideas for reporters.

In her “How I did it” essay, Karen Brown describes how she tracked a group of primary care residents for a year of their training – a year in which two of the three she chose to focus on ultimately decided not to go into primary care after all.

“Their decisions may have been disappointing for the field, but they did make for a more compelling story. I was able to use their personal dilemmas, unfolding in real time, to illustrate the crisis in primary care,” she writes. Brown had an AHCJ fellowship to do her project, but she gives advice on how to embark on a similar project  – without a fellowship – in your community.

In the tip sheet, Lola Butcher explains the 340B drug program, which requires pharmaceutical companies to sell discounted drugs to eligible health care organizations that serve a lot of poor people. The drugs are for outpatient use.

But the program has continued to grow, prompting questions about its cost and purpose. “Like all good controversies,” Butcher writes, “this one has enthusiastic advocates and wild-eyed opponents, and it’s easy to get snagged by the passion of the partisans.”

Both feature projects were funded with AHCJ Reporting Fellowships in Health Care Performance.

A secretive committee of the American Medical Association exaggerates how much physician time and effort is involved in performing many medical procedures, according to an analysis of the committee’s work by journalists at The Washington Post.

That exaggeration skews payment in favor or physician specialists and at the expense of primary care physicians, according to the article by the Post’s Dan Keating (@dtkeating) and Peter Whoriskey (@PeterWhoriskey).

The claim that the committee overstates the time involved to do many procedures has been reported previously. What is unusual about Keating and Whoriskey’s analysis of the AMA’s 31-member Relative Value Update Committee is that they calculated the committee’s estimates of the time involved for physicians to do many procedures and found the numbers to be off by as much as 100 percent in favor of specialist physicians. END_OF_DOCUMENT_TOKEN_TO_BE_REPLACED 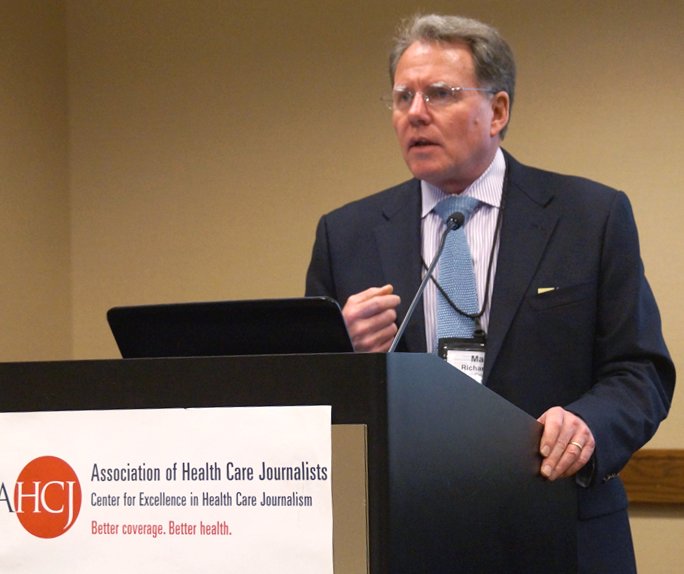 Len Bruzzese/AHCJMark Richardson, dean of the OHSU School of Medicine

Rural areas have a disproportionate need for primary care physicians but, according to a panel of physicians at Rural Health Journalism 2014, that need is not being met.

Bazemore emphasized the importance of primary care, noting that in comparison to 10 other developed nations, the U.S. ranked lowest in both primary care and health outcomes.

Richardson drove the point home with some sobering information on the state of primary care in the U.S.: While there are 249 patient care physicians for every 100,000 Americans, there are only 106,000 primary care physicians. Almost 27 percent of those providers are over age 60, so their numbers are only expected to drop in the coming years.

So how can rural primary care get a boost?