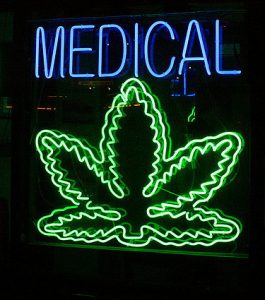 U.S. Attorney General Jeff Sessions wants to crack down on medical marijuana. He was soundly rebuked by Congress last year, which provided no funding for his plan. That’s good news for older adults, who are among the fastest growing cohort of users.

They increasingly are turning to medical marijuana to manage a range of conditions, from cancer and Parkinson’s disease to chronic pain. A recent study published in The European Journal of Internal Medicine found that cannabis therapy is safe and effective for elderly patients who are seeking to address these and other medical issues. END_OF_DOCUMENT_TOKEN_TO_BE_REPLACED 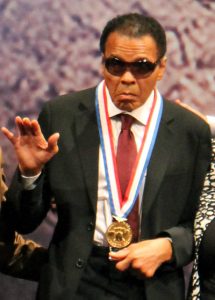 Photo: Peter T. via FlickrLegendary boxer Muhammad Ali, shown after receiving the 2012 Liberty Medal in Philadelphia, Pa., had lived with Parkinson’s disease for more than 30 years before dying in 2016 at age 74.

We probably all know at least one older person who has developed Parkinson’s disease, a degenerative neurological condition which affects one in every hundred people over age 60.

A small proportion (about 4 percent) of adults under age 50 can develop it too. The National Institutes of Health estimates that one million people in the United States are living with this condition. As the population ages, incidence will likely increase, putting more pressure on the health system at a time when funding for federal health and science programs and research is under pressure.

Parkinson’s affects a person’s movement, speech, cognition, balance and behavior. There is no known cure, nor can symptoms be reversed, though they can be managed through a regimen of multiple medications and therapy. The Parkinson’s Disease Foundation estimates direct and indirect costs of the disease in the United States at around $25 billion annually. END_OF_DOCUMENT_TOKEN_TO_BE_REPLACED

Each year, the AHCJ conference includes a smorgasbord of opportunities to inform and enhance journalists’ knowledge and reporting. Topics include health care disparities, hospital performance reporting, age-specific conditions for youth and elderly alike – and, of course, what the medical research reveals about these and other subjects.

Even in sessions that focus on a specific population or a condition that doesn’t immediately seem relevant to medical research – such as how to cover the ongoing opioid epidemic – there likely are ways that the material intersects with research on that topic. If you’re looking for stories that might involve some digging in PubMed, here are some sessions to consider during Health Journalism 2016 in Cleveland, April 7-10. END_OF_DOCUMENT_TOKEN_TO_BE_REPLACED

There seems to be no end of news reports about promising therapies for Alzheimer’s disease and Parkinson’s disease.

With the aging of the population having become one of the more serious and complicated aspects of modern American health care, these typically age-associated conditions are driving a lot of research into new drug and other treatment approaches.

Despite high excitement and hope surrounding the latest treatments, journalists need to report responsibly on these drugs to avoid delivering false hope and ensure their stories are leavened with balanced, quality information. There is always a risk that reporters may too easily accept what drug manufacturers, geriatricians and others tell them about new therapies and not demand to see the research backing up their claims.

Alan Cassels (@AKECassels), a writer and drug policy researcher affiliated with the School of Health Information Sciences at the University of Victoria, has some tips for reporters covering treatments for Alzheimer’s and Parkinson’s diseases.