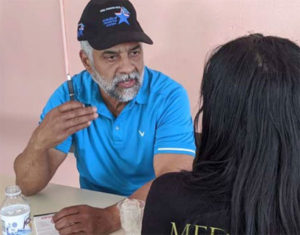 Retired physicians, nurses and other health care professionals have been asked to volunteer for duty in the wake of the coronavirus pandemic.

However, many of these retirees fall into the high-risk group for contracting COVID-19. They face a difficult choice: stay away and stay safer, or put aside the potential risk to help care for an increasingly sick population. END_OF_DOCUMENT_TOKEN_TO_BE_REPLACED

When the Atlantic’s Ed Yong began thinking about a story on health security, he realized he needed a basic definition for a core point of the story — what is emergency health preparedness?

“Something dawned on me,” Yong said. “I didn’t really understand what exactly preparedness meant. I had been writing the word for a long time and doing stories on it, but it felt a bit abstract and nebulous.” END_OF_DOCUMENT_TOKEN_TO_BE_REPLACED

AHCJ member Stefanie Friedhoff has led a Nieman Foundation effort to bring together as much pandemic flu material as possible in one spot. The CoveringFlu.org guide not only helps reporters with the science, historical context and journalism involved, but also with practical safety considerations.

Much of the content came out of a 2006 conference, The Next Big (Health) Crisis – And How to Cover It, presented by the Nieman Foundation and cosponsored by AHCJ. It brought journalists together with scientists, public health officials, medical experts, academic researchers, law enforcement officers, public policy experts, and Homeland Security officials to talk about how best to prepare for the possible arrival of pandemic flu.

Read edited excerpts from a lengthy transcript from the event:

AHCJ also has these resources for journalists covering flu stories:

The Department of Health and Human Services’ Office of Inspector General has released two reports assessing just how prepared Americans are for a flu pandemic. Their findings? Communities are on the right track when it comes to preparing for a surge in patient numbers, but they’re not as ready as they could be. Likewise, there’s still more to be done before local organizations will be ready to distribute vaccines and antiviral drugs.

A surge of flu victims

In the Southern Hemisphere, where the flu season has already struck, the biggest systemic issue was lack of space in intensive care units overwhelmed by H1N1 victims. Are American communities doomed to more of the same? After reviewing the coordination, volunteer recruitment/organization, medical equipment, alternate care and triage and admission guidelines of 10 localities as of late summer 2008, the OIG’s answer is a resounding “not quite.” (Get the full 37-page report here.)

The OIG’s to-do list for the assistant secretary for preparedness and response?

Getting vaccines/antivirals to the right place, at the right time

According to HHS, “even a mild pandemic could cause between 2 million and 7.4 million deaths worldwide” and H1N1 looks to be a “moderate” one. Vaccination is a key component of the prevention plan, which is why the OIG evaluated the pandemic flu plans of 10 communities in the categories of “Receiving & Staging, Dispensing, Tracking, Vulnerable Populations, Priority Groups, Security, Storage, and Transportation.” In general, they found that the communities need to practice more, plan for all eight categories and make those plans “actionable.” In general, folks were best at planning for receiving/staging and dispensing and worst at planning for security, storage and transportation.(Read the whole 57-page report here.)

Based on those findings, the OIG recommended that the CDC:

Joey Holleman at The State reviewed South Carolina’s reaction to H1N1 and what it revealed about the state’s pandemic preparedness. Holleman found that, on the whole, state officials and health professionals felt their pandemic preparations, put in place after scares such as SARS and H5N1, had worked well and proposed only minor adjustments to the overall plan.

So far, the state has had 36 CDC-confirmed cases of H1N1 and no reported deaths. The cornerstones of S.C.’s response have been rapid stockpiling of necessary medications and materials and rapid education of both hospital staffs and the public. For the most part, officials said, the effort was not much different than previous efforts to contain other infectious diseases like chicken pox or whooping cough.