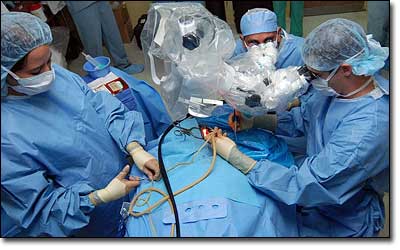 After all, some 60% of surgical procedures today are performed in an outpatient setting, so patients have a right to know what policies and procedures the facility uses to safeguard against errors and complications. END_OF_DOCUMENT_TOKEN_TO_BE_REPLACED

Bloomberg’s David Armstrong has put together an investigation of a simple, effective and dubious new business formula, one which begins with pain in the back. In thousands of patients, this chronic back pain leads to desperation, desperation leads to Internet searches, and Internet searches lead to rosy-sounding ads for laser spine treatments from the fast-growing, high-priced, high-volume clinics that are blossoming around the country.

According to Armstrong, this trend is epitomized by Laser Spine, the six-year-old industry leader with $109 million in sales last year and a monster profit margin of 34.3 percent from 2006 to 2009. It typically charges about $30,000 per procedure, or about half of what any insurer would be willing to pay for a garden-variety laser-free surgery.

Laser Spine and its competitors, part of a boom in outpatient clinics operated by entrepreneurial physicians, sell a high-tech version of procedures that have been around for years — despite a lack of independent research to show that their variations lead to better outcomes. The company commands higher prices than laser-less rivals, driving up the cost of health care. Its number of malpractice claims per 1,000 surgeries is several times the rate for all U.S. outpatient surgery centers, based on insurance industry data.

How do these companies get away with charging high prices for procedures with shaky track records? Through a gap in federal regulation that will be familiar to reporters who have investigated surgical robots and other high-tech procedures.

While the Food and Drug Administration regulates the use of drugs and medical devices, there’s virtually no federal oversight for the effectiveness of surgical techniques.

“This is an issue with surgery generally,” said Robert McDonough, head of clinical policy research and development at Aetna. “Surgeons can introduce new procedures that might be significantly different from established ones with no oversight of the claims they make.”

Drug-makers’ ads — including sponsored links that appear in response to search-engine queries — must disclose their medications’ risks, under FDA rules. Ads for surgical techniques have no similar rules.

AP medical reporter and AHCJ board member Carla K. Johnson used FOIA requests to uncover a wealth of infection-control violations at outpatient clinics in Illinois. The majority of Illinois ambulatory centers have yet to be inspected under the tough new rules, but 76 percent of those which have been inspected also have been cited. The inspections are part of a national push to increase the oversight of ambulatory care centers.

Previously, inspectors from the Illinois Department of Public Health visited the centers about every seven years. But the state last year began more vigorous and frequent inspections of outpatient surgery centers, following directives from national health officials. The state now plans to inspect a third of Illinois centers each year, said Karen Senger, a supervisor in the Health Department’s Division of Health Care Facilities and Programs.

The crackdown resulted from a hepatitis C outbreak in Las Vegas believed to be caused by unsafe injection practices at two now-closed clinics.

Johnson’s state request turned up a laundry list of specific violations, all of which she summarized in one nifty sentence: “The five-second rule appears to be alive and well in Illinois same-day surgery centers, where medical staff were observed picking up items that had fallen to the floor and behaving as if they weren’t contaminated by germs,” Johnson wrote. In an e-mail to Covering Health, Johnson said her story should be easy to localize and explained just how she obtained the inspection reports and why they are now available.

I FOIA’d state inspection reports (CMS-2567s) for ambulatory surgery centers in Illinois that were cited for deficiencies in infection control during the past 12 months. States have been directed by HHS to use a new audit tool to look for infection control problems, following an outbreak linked to two centers in Las Vegas.

With a nod to the established dominance of outpatient surgery, NPR health blogger Scott Hensley explores a recent JAMA study which demonstrates that outpatient, same-day surgery carries with risks of infection that Hensley said were “a lot higher than they should be.”

Random inspections of nearly 70 surgery centers in three states found that two-thirds had at least one significant lapse in controlling infections. One common problem was the use of single-dose medication vials for more than one patient — found in 28 percent of the inspections.

Quite a few stakeholders have thoughts on the study, starting with a companion editorial by surgery professor Philip S. Barie (bio). The relevant trade group has also produced a response, as has HHS Secretary Kathleen Sebelius. Both say about what you might expect. The industry group says that an industrywide infection clampdown and new CMS standards for such activities have helped control the problem in the time since the study’s data was collected, and Sebelius trumpets current and future HHS efforts to avoid as many health-care-associated infections as possible.

Taken from an industry group report, this graph shows at a glance exactly why outpatient surgery is such a significant issue.