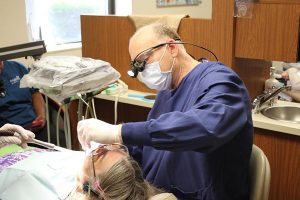 It is a scenario that regularly plays out in statehouses during times of fiscal austerity: funding for Medicaid dental services goes on the chopping block. A shortage of Medicaid dental providers already is a major problem in many communities and dentists often blame low reimbursement rates and budget cuts for making the problem worse.

Reporter Andy Marso has been following the problem in Kansas. END_OF_DOCUMENT_TOKEN_TO_BE_REPLACED

The Kansas Health Institute’s Dave Ranney attempts to illuminate and explain the fears that research into the comparative effectiveness of health care will lead to a “rationing” system that forces patients toward the cheapest options. Ranney interviewed prominent Kansas sources on all sides of the debate.

Roberts warned that there’s little to stop the federal government from using the research to figure out which medications or treatments achieve similar results for less cost. When that happens, he said, it won’t be long before Medicare starts cutting costs by steering doctors toward the cheaper alternatives and rationed or cookie-cutter treatments heedless of individual results.

And where Medicare goes, the nation’s health insurers will soon follow.

In response to Sen. Roberts, Ranney quoted a health policy expert who said such theories are “fear mongering, it’s raising the specter of socialism, it’s telling people they’re going to have some fuzzy-headed bureaucrat telling them what to do, denying them choice.”