On a recent What the Health podcast, where I’m a frequent guest, we took some listeners’ questions. One was about what CMS does with all the data it collects on quality from health care facilities and providers – and whether there’s any evidence that the quality reporting actually improves outcomes for patients. END_OF_DOCUMENT_TOKEN_TO_BE_REPLACED 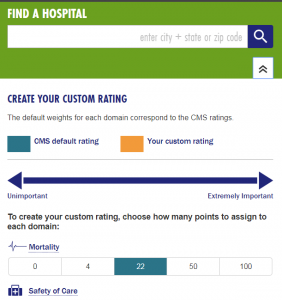 The federal Centers for Medicare and Medicaid Services launched the Hospital Compare website to let consumers evaluate hospital performance based on a star-rating system. For those seeking to analyze hospitals’ overall scores, the site is useful but its one-size-fits-all approach limits how much patients can design searches to match their individual needs.

Now researchers at the Rand Corporation have built a tool called the Personalized Hospital Performance Report Card that allows users to review, customize, and compare hospitals across the United States and develop their own custom ratings based on their most important performance areas. END_OF_DOCUMENT_TOKEN_TO_BE_REPLACED

After the local county commission voted to close Birmingham’s Cooper Green Mercy Hospital and replace it with a hub-and-spoke system of distributed care, protesters began to rally around the institution, claiming that its closure would hit poor residents hard, and that the hospital had earned some of the highest patient satisfaction numbers in the nation.

When WBHM’s Tanya Ott heard talk of patient satisfaction ratings, she took the simple step of firing up Hospital Compare and seeing how Cooper Green stacked up against local competitors. As it happens, Cooper Green has, in recent years, lagged behind the hospitals to which its patients would likely be diverted.

So, with just a few clicks, Ott, who posted the Hospital Compare charts directly into her story, brought important context to a contentious local issue. For more on how to use this and other tools to evaluate local hospitals, see AHCJ’s Hospital Compare resources.

Encouragingly, Clark quotes officials who have found that the only way to deal with all these new numbers is not to ignore or discredit them, a tempting option that has often been the default in the past, but instead to release even more data, and to better educate the public about the numbers that are out there.

(James) Conway says that whatever they do, hospitals should not do what they used to when negative stories arose, “which was lay low, hope it vanishes, and take a ‘this too shall pass’ attitude. Or, if there’s data that says, for example, your coronary artery bypass graft profile is horrible, historically what hospitals have done is to discredit the data. It’s sort of like a pigeon in a shooting game.

“But what we’ve learned is that the organization must ask a critical question: Could this data be right?”

That, of course, is where health journalists come in.

Charles Ornstein, president of the Association of Health Care Journalists and an investigative healthcare reporter with ProPublica, says hospital executives should get used to heightened attention. The AHCJ is beefing up efforts to educate reporters on how to find and interpret quality statistics about healthcare providers, where to see inspection reports, and how to compare patient experience, readmission, and mortality rates.

“More reporters are realizing the treasure trove of information they can find,” he says. “For decades, hospitals fought to keep this information out of the public domain. But now that it is public, we as journalists have an obligation to make it relevant.”

At Health Journalism 2012, Harvard’s Ashish K. Jha, M.D., M.P.H.,  told attendees to  watch for new hospital report cards from The Leapfrog Group that were going to be both comprehensive and consumer-friendly. Jha and some other top health quality/safety people were among the project’s advisers.

People can understand letter grades – A through F. The idea is that a comprehensive approach – an overall grade – is more useful in the sense that, if a hospital gives fabulous and safe cardiac care, it doesn’t mean that a patient won’t get an avoidable infection during, say, a routine hernia operation or have a cesarean section that wasn’t unambiguously necessary.

Well, it turns out that the ratings aren’t just a tool in the whole consumer/quality movement. Some of the links at the end of this post can tell you more about the limits of these proprietary report cards versus public data – but consumers are seeing more and more of these “report cards” and you can use them for stories too. END_OF_DOCUMENT_TOKEN_TO_BE_REPLACED