She will be guiding AHCJ members to the resources they need to cover the many aspects of health information technology through blog posts, tip sheets, articles and other material. The core topic area of healthjournalism.org will feature a glossary, a more lengthy explanation of key concepts, shared wisdom from other reporters, story ideas and more. END_OF_DOCUMENT_TOKEN_TO_BE_REPLACED

View all posts by Richard Asinof → 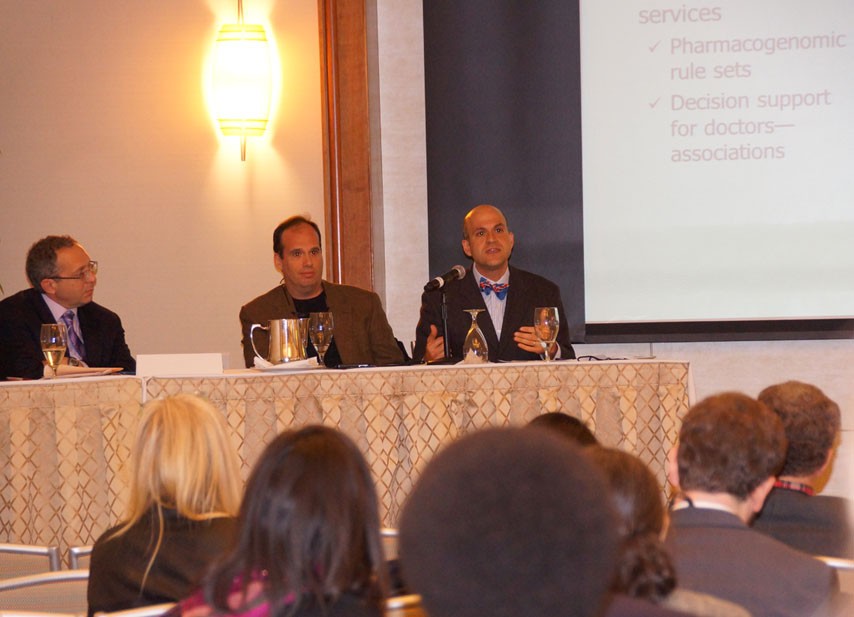 Electronic health records are a tool, the bottom floor on creating standards to move from mere billing and data collection into a platform to change the way health care is delivered, the way it is paid for, and the manner in which patients are engaged, according to Farzad Mostashari, M.D., Sc.M., the national coordinator of health information technology at the U.S. Department of Health and Human Services.

Mostashari’s optimistic view of EHR implementation, presented at Health Journalism 2013 in Boston, was challenged by Stephen Soumerai, Sc.D., professor of population medicine at Harvard Medical School. Soumerai that the government’s investment of $1.6 trillion in building the health information technology infrastructure is unsupported by any research that it will create the predicted return on investment, citing the recent Rand Corporation study that said cost savings would not occur. The investment was being made without any evidence that changes in delivery, outcomes, quality and cost savings can be achieved. END_OF_DOCUMENT_TOKEN_TO_BE_REPLACED

According to the National Association of Community Health Centers, about 20 million patients get their primary health care needs at more than 8,000 U.S. locations. I’ve seen various projections of how that will grow under health reform (depending on fun ding and other factors) but the NACHC says it could double, to 40 million, within another five years.

There’s another aspect to the community health center workforce – one that, frankly, I had never thought about until I got a release about a set of grants a few weeks ago from a small foundation that focuses on community health. The clinics don’t just need doctors and nurses. They need people who can just run the places – who can make appointments and keep records, and do the coding and billing, and handle the health IT, and do health outreach in the community, and the case management. And they need people who speak a bunch of languages and be culturally sensitive. In other words, they need all kinds of people who can do the work necessary for these clinics to become effective “medical homes.”

So the RCHN Community Health Foundation recently announced grants of about $150,000 to $200,000 each to five very different community health groups, in five quite different settings. (On the foundation’s home page you can find links to some of the coverage it has gotten.)

The details vary, but they are developing training programs (which can be done during the work day), partnerships with local schools, community and four-year colleges, internships, outreach to potential entry-level workers who hadn’t thought of this career path, worker retention programs – with an eye both toward their own needs, their workers’ future advancement, and job creation in their communities, including veterans. In some cases, they will be designing their resources and programs with a clear eye toward having them spread, to be available and useful to other clinics, other communities.

Chances are, you won’t be covering these five specific clinics. But the challenges these grants are aimed at exist everywhere and are ripe material for covering:

You – and your reader, listeners, and viewers – may be quite surprised by some of the innovative, change-embracing answers.

A new, but time-limited – looks like the emails may just be going out for just for 30 days – resource has been pouring into my inbox faster than I can read it. It’s called Care about your  Care, and it’s sponsored by the Robert Wood Johnson Foundation and a bunch of other groups (about 30 in fact: find the list here).

Joanne Kenen (@JoanneKenen) is AHCJ’s health reform topic leader. She is writing blog posts, tip sheets, articles and gathering resources to help our members cover the complex implementation of health reform. If you have questions or suggestions for future resources on the topic, please send them to joanne@healthjournalism.org.

Part of the “Care” material is very consumer oriented- learning some of the basics about health care quality, such as “more is not always better” and how people can engage in their own care.  That may help those of you who are trying to communicate the basics to your audience. There’s also a link to an RWJF site that pulls together in one place a lot of publicly available information about both cost and quality of care (people often ask questions about tracking down such data on the AHCJ electronic discussion list.)

But what really caught my attention about Care about your Care is that it’s a terrific road map to a lot of the innovation going on across the country, much of which hasn’t registered in the national media or in some cases even in the policy conversation. Some of the sites mentioned are Beacon communities – pace setters in using health IT to improve care. Some are part of RWJF’s Aligning Forces for Quality.

Looking though these Care about your Care alerts, I found a few initiatives that were particularly interesting because they brought so many difference branches of the community together – health care powerbrokers and local neighborhood groups.

Healthy Memphis: The Common Table, for instance, has programs ranging from diabetes control to encouraging farmers markets to training neighborhood health advocates who can then spread the work about quality care, including in low-income and underserved areas.  Results can be  measured: More people with diabetes are getting their blood sugar screened appropriately, the adult smoking rate has dropped,  farmers markets are springing up,  mammograms … well, maybe we shouldn’t go there.

So explore the site. Find out what’s going on in your state. And if the answer is nothing, find out why. Maybe you’ll discover that these ideas about quality and change are slowly begin to percolate, not just to “early adopters” aligned with groups like RWJF but through ordinary cities and towns. “Health reform” can be seen as more than a piece of legislation to fight about in Washington.

It is,  potentially at least, a new way of thinking about, talking about, and doing something about both “health” and “care.”

In these posts about covering health reform, I usually don’t point to the big national dailies because a lot of people have already read those stories  but a recent New York Times piece, “As Physicians’ Job Change, So Do Their Politics” is a story that may be able to help reporters think about a good local or regional  jumping off point  for telling aspects of the health reform story in a more narrative, accessible manner, through the eyes and experiences of doctors.

The Times story, by Gardiner Harris, described a shift leftward (or at least less rightward) among physicians. He cited several reasons: younger doctors, more female doctors, and above all more doctors who are salaried employees of hospitals instead of basically being small businessmen (or women) running a practice.

Because so many doctors are no longer in business for themselves, many of the issues that were once priorities for doctors’ groups, like insurance reimbursement, have been displaced by public health and safety concerns, including mandatory seat belt use and chemicals in baby products.

Even the issue of liability, while still important to the A.M.A. and many of its state affiliates, is losing some of its unifying power because malpractice insurance is generally provided when doctors join hospital staffs.

He wrote mostly about Maine, but had a few observations about other states, including Texas. Last year Texas physicians opposed the national health reform law by a three to one margin. But doctors who did not have their own practices were twice as likely to support the law. The same goes for female doctors.

How does a story about physician politics translate into a narrative about health reform?

The shift to salaried positions has many causes (including work-balance for doctors who want more time with their families) but the move toward more clinical integration  and the formation of accountable care organizations or ACO-like entities will hasten this trend.   It is really, really, really hard to explain ACOS clearly and concisely (when an editor of mine recently asked me to give him a nice, tight two-graf description, I began it something like, “One of the challenges of ACO is that they defy simple explanation.”)

But doctors who are joining hospital staffs or whose practices are being bought up by hospitals or who are entering different contractual relationships and affiliations with hospitals have stories to tell.  You can also talk about quality measures and “never events” and how that affects physicians and the practice of medicine, particularly in states mandating more public reporting. Through their stories, you can illustrate what an ACO is or isn’t, or how a medical home works, or  what “clinical integration” means.

I interviewed a physician in South Carolina the other day, Dr. Angelo Sinopoli, who told me about  how the team approach and the use of electronic medical record with clinical decision support was giving him more real-time feedback on his own performance – and he welcomed it.

“You think you are doing something and you might not be, or think you might not be, but you are,” he said. “Seeing real data in as real time as possible made a difference in how we think.” That made me understand an aspect of the electronic medical record that I hadn’t understood before, and readers can grasp that too.

You can explore the changing attitudes and politics along with that – in some states that may be more significant than others, depending on what your state is doing with health exchanges, malpractice legislation, quality reporting etc.

Learn more about how electronic health records could mean new opportunities to improve clinical care and public health, according to David Blumenthal, M.D., the former national coordinator for health information technology. Blumenthal spoke at Health Journalism 2011 as he was leaving his federal position.