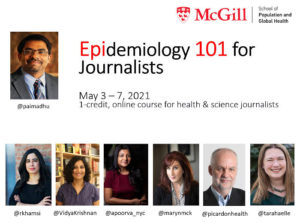 No matter what beats a journalist covered before 2020, nearly every one of us has had to write at least a bit about epidemiology over the past year. Some reporters were completely re-assigned to a COVID-19 beat without any previous experience in health or science journalism. Others may have already been writing about health and science but not spending much time in the areas of infectious diseases, vaccines and epidemiology. It’s been a steep and continuous learning curve for many — I’ve been covering epi for a decade and still learn something new at least once a week. END_OF_DOCUMENT_TOKEN_TO_BE_REPLACED 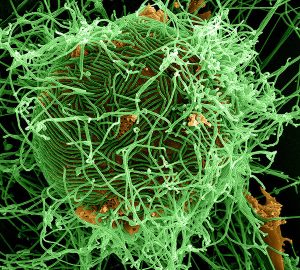 Ebola is back in the news again with the evolving outbreak in the Democratic Republic of the Congo. Could the virus come to the United States again?

Given that every disease is now just a plane ride away it certainly could, although the odds are low. Global health workers are responding to the outbreak aggressively.

The unfolding events in the DRC however, are a reminder that reporters – like public health officials – should be prepared for the next infectious disease threat. END_OF_DOCUMENT_TOKEN_TO_BE_REPLACED 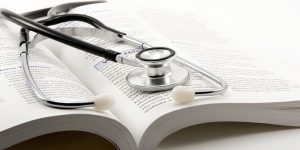 By Dr.Farouk via Wikimedia Commons

In a previous post, I discussed how journalists can use MOOCs — Massive Online Open Courses — to broaden or deepen their knowledge of topics they cover. There also is a lengthy list of MOOCs specific to individual beats available on the AHCJ website. END_OF_DOCUMENT_TOKEN_TO_BE_REPLACED

As you report on medical studies more and more, you probably start to notice patterns in the parts that you find confusing or difficult to parse. You start to realize where you need the most help in understanding a study, or perhaps you know you need to refine your skills but aren’t sure how.

Massive Online Open Courses (MOOCs) are a great way to sharpen some skills and learn some new ones. END_OF_DOCUMENT_TOKEN_TO_BE_REPLACED

The analysis found that there are fewer epidemiologists resulting in a reduced capacity for surveillance and epidemiology – especially in the areas of bioterrorism and emergency response. It also reveals that a number of states lack the ability to perform several of the essential services of public health, that states are lacking in the technology to conduct surveillance and that many epidemiologists with high levels of training are leaving the public health sector.

The assessment is based on an online survey filled out by state epidemiologists or their delegates between April and July of 2009.

The 122-page report includes recommendations and an in-depth examination of the workforces, the functions that are in jeopardy, the funding sources for state health departments and more.

The CSTE Web site also has a handy directory of state epidemiologists that includes e-mail addresses.

Writing for Men’s Journal, Tom Clynes followed Nathan Wolfe — the virological and epidemiological equivalent of a rock star — to remote regions of Cameroon (PDF), one of the raw frontiers in the transmission of disease between animals and humans and the place where some scientists believe HIV may have made its way to humans more than a century ago.

Clynes writes that Wolfe has pioneered a new, immersive model of disease detection that gives him a fighting chance of detecting the next big human pandemic before it gets out of control.

GVFI’s method flies in the face of the “parachute science” approach that has long typified data collection in the Third World. Wolfe thinks he’s got the system down, and he believes that, with the right collaborators, his model can be scaled up and repeated anywhere in the world.

Working like this, one village at a time, Wolfe has quickly accumulated one of the most comprehensive blood collections on Earth, some 25,000 human and 16,000 animal samples that are available to researchers around the globe. “I can guarantee that these repositories of samples will be treasure troves of information for the future,” says Michael Worobey, of the University of Arizona.

The global health community believes the dangers Wolfe and his team and others in the field are working to detect are very real, lending an urgency to GVFI’s work.

The SARS outbreak killed more than 700, but it could have been far worse. A massive international containment effort, led by the WHO, averted a doomsday scenario and quickly controlled the outbreak. What worries people like Dr. Michael Ryan, coordinator of the WHO’s Global Outbreak Alert and Response Network, is that SARS may have been just a rehearsal for something worse. “We winged it with SARS,” says Ryan, “and we got away with it, because the core countries had the capacity to deal with it. But if SARS had happened in rural Africa we’d still be dealing with it. And I think it’s inevitable that we’ll be hit with something new that will be harder to put back in its box.”