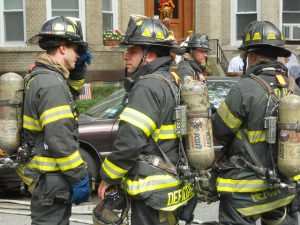 Much of the local news over the Independence Day weekend focused such as fireworks safety, beach traffic, flags and parades. But a brief article by Samuel Johnson, the public information officer of the Baltimore Fire Department, caught my attention — and had nothing to do with the holiday.

Many budget-crunched municipalities have been forced to cut back on essential services, such as police and fire personnel. Some firehouses have even closed. That increases the risk for everyone who lives near one — especially older adults and particularly in the summer months. END_OF_DOCUMENT_TOKEN_TO_BE_REPLACED

The Tulsa World‘s Ziva Branstetter has, for months now, been doggedly investigating the billing practices of the Emergency Medical Services Authority, an agency that provides ambulance service to many residents in and around Tulsa and Oklahoma City. The service is largely funded by utility fees which, unless users specifically opt out, should cover the payers’ out-of-pocket costs.

Instead, Branstetter has found, EMSA has followed a number of apparently deceptive billing practices, including sending bills that list a “due from patient” balance of something like $1,100, even though that amount is actually covered by the utility fee. It also unilaterally implemented a policy making patients responsible for the balance if they don’t provide insurance information within 60 days, while providing lavish benefits to employees and executives.

Branstetter’s latest efforts have been directed toward innovative ways of proving EMSA’s sketchy billing practices, as well as uncovering the details of benefits given to the public utility’s CEO. For a full list of Branstetter’s stories on the subject, databases and documents, as well as a summary of the issues at hand, visit the World‘s excellent landing page for the investigation.