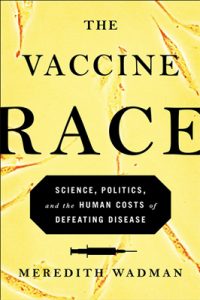 The story of how cancer cells belonging to Henrietta Lacks were used, without her consent, became one of the most important foundations of research was told in the 2010 book “The Immortal Life of Henrietta Lacks.“ But less-known is the story of how another key set of cells was developed from fetal tissue and used in vaccine testing on patients without their consent.

Meredith Wadman tells this story of controversy in her 2017 book, “The Vaccine Race: Science, Politics, and the Human Costs of Defeating Disease.” She found the story just by reading a letter-to-the-editor about patient consent in the publication Science. END_OF_DOCUMENT_TOKEN_TO_BE_REPLACED