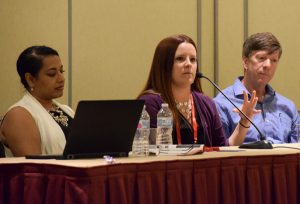 Treating people with possible concussions means providers must assess and manage a wide range of patients, from young athletes and military personnel to domestic violence victims and the elderly, the experts said during the Friday session, “Concussion and brain health: New angles on diagnosis and treatment,” which was moderated by National Public Radio editor Scott Hensley. END_OF_DOCUMENT_TOKEN_TO_BE_REPLACED

Kristofor Husted is a multimedia journalist and filmmaker specializing in science, environmental and health reporting. He received his B.S. in cell biology from UC Davis and earned an M.S. in journalism from Medill at Northwestern University.

View all posts by Kristofor Husted →

Barry Bonds may be the best in history at hitting a baseball* (I’ll put an asterisk on that for the haters), but that doesn’t mean he is better than you at, say, hitting a softball. Just ask U.S. Olympic softball pitcher Jennie Finch, who struck him out.

Elite athletes have spent thousands of hours perfecting a skill. For Bonds, it was reading hardball pitches, not softball pitches. END_OF_DOCUMENT_TOKEN_TO_BE_REPLACED

Rachel George, Iliana Limón and Shannon J. Owens of the Orlando Sentinel look at college football players whose deaths have been linked to sickle cell trait.

Overwhelmingly in the past 11 years, more non-traumatic football deaths have occurred from complications from sickle cell trait than any other cause. It has accounted for nine of the 21 non-traumatic deaths in that time despite the trait existing in just 8 percent of African-Americans. It accounts for an even lesser extent in Hispanics, Caucasians and other ethnicities. And while the trait has been linked to deaths in other sports and at other levels, it has affected a much greater number of college football players.

Many doctors, coaches and trainers wonder what factors push a “generally benign” trait into a dangerous medical condition. George outlines some of the factors, such as coming back to training after a break, the kinds of drills athletes do, heat and hydration, altitude and more.

In the stories, doctors, coaches and former players discuss why football accounts for 82 percent of the cases in the U.S. National Registry of Sudden Death in Athletes.

The story includes NCAA materials about sickle cell trait and a graphic of the difference between normal blood cells and sickle cells. In a related story, Owens reports that “every baby in the United States is tested for sickle cell trait at birth, many athletes who’ve had it either didn’t know or didn’t understand what it meant.” In another story, she talks to parents of a child born with sickle cell trait who say they didn’t get information about the potential fatal complications.