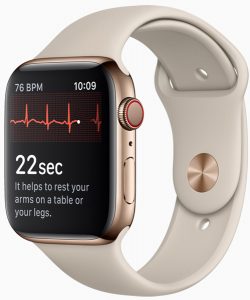 Health reporters provided rich context – and a dose of skepticism – around Apple’s introduction of the Apple Watch Series 4, which included an electrocardiogram (ECG) app and fall detection capabilities.

In case you missed it, the big news was that Apple received Food and Drug Administration (FDA) clearance for its electrical heart rate sensor that can take an ECG using a new enabled app. The app can detect signs of atrial fibrillation (AFib), an irregular heartbeat that can lead to stroke, blood clots and other heart complications. END_OF_DOCUMENT_TOKEN_TO_BE_REPLACED

The Philadelphia Inquirer‘s Stacey Burling reports that neurosurgeons will be skipping the paper for their next meeting, relying instead on iPod Touches pre-loaded with conference materials.

Reading on the iPod Touch. Photo by Ben Kraal via Flickr

It will be only the second conference to have done so (a group of Canadian filmmakers was the first). Registration fees were hiked by $100 to cover the cost of the devices, and local Apple staff will be on hand to answer questions. Burling describes the process:

When they register at the American Association of Neurological Surgeons meeting, the doctors will be given iPod touches already loaded with everything they’ll need, including the program (165 pages last year), summaries of research presented at the meeting, advertising and information from exhibitors. Doctors will be able to use the iPods for messaging and for interacting with presenters during meetings. The convention also attracts 3,500 exhibitors and guests who will not be given the devices.

Apple CEO Steve Jobs still isn’t talking about his health. But a Tennessee hospital confirmed a Wall Street Journal scoop over the weekend that said the secretive exec had a liver transplant.

Jobs has been ill and took a leave from the company early this year. But his statements, and those of the company, have been vague – at best. The front-page Journal story saying he’d had a liver transplant was nearly as vague, lacking attribution for the claim.

Well, Methodist Hospital of Memphis, with Jobs’ permission, has ended the speculation on the veracity of the transplant report. In a statement, the hospital said he got a new liver because he was “the sickest patient on the waiting list at the time a donor organ became available.” Tennessee has shorter waiting times than most states.

Jobs’ outlook is good, the hospital said. Wonder what Apple and Jobs have to say on that score?

It’s especially curious that Methodist, operating under patient privacy rules, was more inclined to get the news out than Apple, a publicly traded company obligated by securities regulations to disclose material information.

There’s plenty of wiggle room in those regs. Still, as Columbia University law prof John Coffee tells Business Week, “Apple is probably an extreme example where the CEO’s health is very material. Walt Disney in 1950 would have been an equivalent.”

Update: A Reuters reporter spotted Jobs at the Apple campus on Monday, adding to speculation that the CEO may have returned to work.