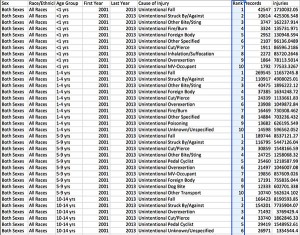 In the age of big data and large datasets available through the CDC, the NIH, and other entities, it helps to know what to do with all that information. One tool for manipulating it – especially since so much is provided in CSV files that easily open in spreadsheets – is Excel.

Consider, for example, data on vaccinations from the National Immunization Survey. The CDC has downloadable data sets going back for nearly two decades. A journalist might want to look for trends in that data, such as changes in coverage in a particular state or changes in uptake for particular vaccines. But once you get all that data downloaded, what do you do with it to look for those trends, especially if you don’t know much about Excel? END_OF_DOCUMENT_TOKEN_TO_BE_REPLACED

One town’s high rate of elective angioplasties has drawn the attention of the California HealthCare Foundation Center for Health Reporting and the San Francisco Chronicle.

Tricuspid valve in a model heart. (Photo by robswatski via Flickr)

Emily Bazar reports that people in Clearlake, Calif., have undergone the procedure at 15 times the rate of people in nearby Sonoma County and more than five times the rate of San Franciscans and Californians. Clearlake residents had elective angiography at nearly six times the state rate.

The project includes a downloadable spreadsheet of heart surgical procedures for 208 geographic areas in California.

The analysis was done by Stanford health research and policy Professor Laurence Baker and was commissioned by “the Campaign for Effective Patient Care, an interest group that promoted the involvement of patients in making medical decisions. Formed during the health reform debate, the group recently disbanded.”

The financial and health implications of extreme variation are enormous, raising the prospect that billions of dollars are wasted each year on unnecessary and potentially dangerous treatments. About 600,000 angioplasties alone are performed nationwide annually at a price tag of more than $12 billion, according to a recent study in the Journal of the American Medical Association.

The analysis finds the heart procedures were performed frequently in other parts of California as well. While one hospital says the disparity is because its rural community suffers from overlapping health situations, comparing it to the Third World, the research shows that above-average use of the procedures was found in urban areas as well.

Yet long-standing research suggests that something else usually causes large geographic variation in medical procedures: striking disparities in how doctors treat diseases.

The project includes a consumer’s guide to heart procedures, graphics and an explanation of Baker’s methodology.

Learn how to use this data

In a webinar next week, Hiding in plain sight: California hospital data, Charles Ornstein, senior reporter at ProPublica and president of AHCJ’s board of directors, will guide attendees through using the data from the California Office of Statewide Health Planning and Development to determine rates of variation for types of treatments.

Ornstein calls the data set a “gold mine” that can answer questions such as:

It doesn’t matter if your hospital is public, nonprofit or for-profit, data on its patients and services are available online. Join us on Sept. 13 to learn how to use this data. California journalists will find this particularly useful, but it also introduces data sets that journalists can request in other states.