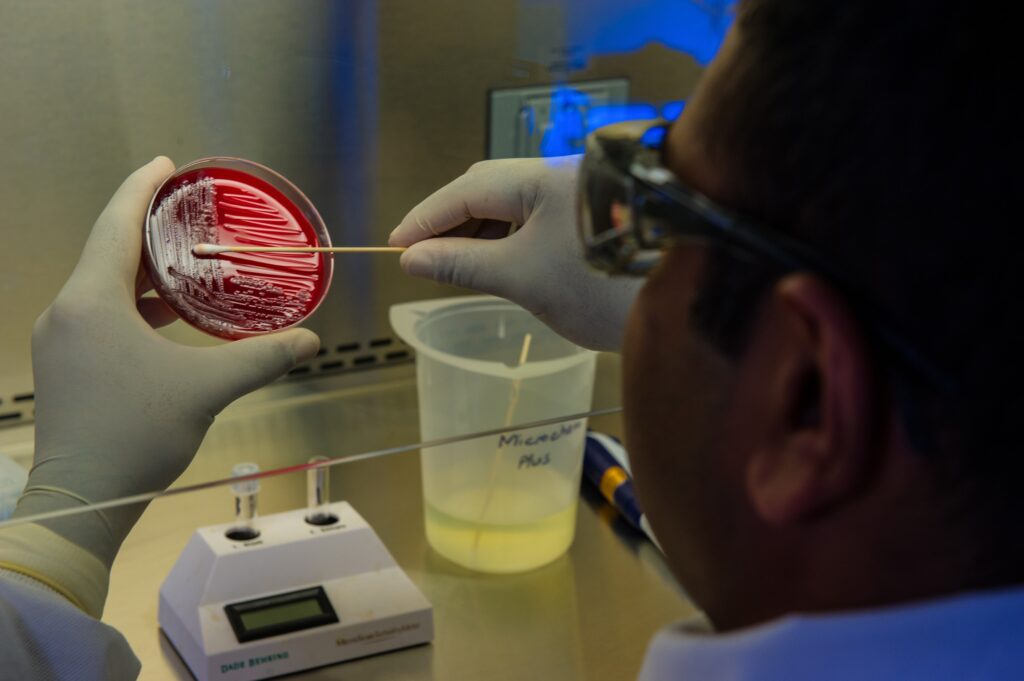 Photo courtesy of the CDC.

Journalists should check in on how the U.S. government and the nation’s hospitals and medical practices intend to regain ground lost during the pandemic in the battle against superbugs. These pathogens have evolved to resist most existing antimicrobial medications, like antibiotics and antifungals.

Before 2020, U.S. health providers appeared to be on a path to reducing the overuse of antibiotics and slowing the growing problem of antibiotic resistance, but COVID-19 disrupted that progress as health care facilities, hospitals, medical clinics and offices and public health departments became overwhelmed with responding to the pandemic

Two years later, journalists can check on hospital and U.S. government efforts to regain lost ground in the battle against superbugs.

Two top federal officials highlighted this threat last week at the annual World Antimicrobial Resistance Congress, Eileen Drage O’Reilly of Axios reported. Health and Human Services (HHS) Secretary Xavier Becerra emphasized how people living in or near poverty are most at risk for antibiotic resistance, especially following the devastation of the COVID pandemic.

Because “for many of us it’s not so much the first punch. It’s the second punch that gets the communities in America,” Becerra said, “The second punch gets those who are least prepared, the most vulnerable, and the most underserved.”

O’Reilly also quoted Michael Craig, MPP, of the CDC as saying the threat of “the pandemic of [antimicrobial] resistance is not going to go away.” Craig is the director of CDC’s Antibiotic Resistance Coordination & Strategy Unit. In July, CDC released a report showing a 15% increase in hospital-related infections and deaths during 2020.

“This setback can and must be temporary,” Craig said in a July statement about that report. “The COVID-19 pandemic has unmistakably shown us that antimicrobial resistance will not stop if we let down our guard; there is no time to waste.”

Antibiotic-resistant infections killed an estimated 35,000 to 48,000 people in the U.S. in 2019 up from 2013 when an estimated about 21,000 were dying annually from resistance infections, according to the CDC. (More recent data is not available from the CDC.)

Journalists with an interest in antibiotic resistance can use a recent Pew Trust study to aid in reporting on hospitals’ efforts to prevent the misuse of antibiotics. They also can dig in and see how well the federal government is funding efforts to keep ahead of microbes. To get a bigger picture understanding of the issues of antibiotic resistance, see our updated 2022 AHCJ tip sheet .

Below are short descriptions of these issues and a few tips.

There’s been massive consolidation in U.S. health care, with more doctors opting to work for health care systems instead of private practice. The American Medical Association (AMA)’s latest biennial survey showed that in 2020 almost 40% of doctors worked directly for a hospital or for a practice at least partially owned by a hospital or health system.

This could present a chance to expand hospitals’ established antibiotic stewardship programs into outpatient settings.

But a study performed by researchers from The Pew Charitable Trusts, Intermountain Healthcare, and the University of Utah suggests this is not always happening. The Pew study surveyed 21 health care organizations known to have active centralized antimicrobial stewardship efforts. Although the systems and networks that participated had all implemented stewardship practices in the hospitals, fewer had done so in their outpatient facilities.

“Given that the majority (80% to 90%) of antibiotic prescribing in the U.S. happens in the outpatient setting and as many as half of those prescriptions may be inappropriate, this highlights a significant opportunity for health systems to help decrease costs and improve patient care through expanded stewardship efforts,” wrote David Hyun, M.D., project director of The Pew Charitable Trusts’ antibiotic resistance project, and Rachel Zetts, MPH, a senior officer with the program, in a blog post.

In response to a request from AHCJ, Pew staff offered the following tips for reporters looking at antibiotic resistance:

Journalists with an interest in antibiotic resistance may find interesting stories in pursuing two financial angles. There’s the immediate question of how much the federal government will spend in the near term on fighting antimicrobial resistance, and then the outlook for the PASTEUR Act, a bill intended to create long-term incentives for drugmakers to develop antibiotics.

Federal lawmakers will decide at some point in the months ahead whether to grant President Joe Biden’s request for additional funds in fiscal 2023 to fight antibiotic resistance. Fiscal 2023 starts on Oct. 1. But in keeping with strong bipartisan tradition, Congress is on track to blow that deadline and run the federal government on stopgap funding through a continuing resolution (CR) once again. (Writing in Roll Call, Paul Krawzak said there are plans for a CR extending into December. For more on the history of tardy spending laws, or appropriations, Leonard Burman posted a thorough summary in a 2020 post on Tax Policy Center.)

So, there are likely to be opportunities in the months ahead to report on how much Congress will spend on antibiotic microbial resistance efforts in fiscal 2023, even after Oct. 1. The Infectious Diseases Society of America (IDSA) in March offered a nice summary of Biden’s request in terms of funding for antimicrobial resistance.

There’s often a flurry of news coverage about presidents’ budgets, leading to an impression perhaps that whatever funds they requested will materialize. But remember that any president’s budget request is just a request, serving as a starting point in negotiations.

Journalists who want to know how much the federal government spends on programs need to track what are known as appropriations or spending bills. You can check in with members of the House and Senate Labor-HHS-Education Appropriations subcommittees to see what is happening with funding for CDC initiatives to fight antimicrobial resistance. Also, ask groups such as IDSA about what they expect to happen with this funding in the months ahead.

Looking longer term, groups like Pew have asked Congress to pass the Pioneering Antimicrobial Subscriptions to End Upsurging Resistance Act (PASTEUR) Act. The legislation is aimed at boosting the number of new antibiotics in the pipeline to stay on top of antibiotic resistance. A February 2022 BIO report showed that the pipeline of new antibiotics to replace those that no longer work remains dangerously thin and likely won’t expand unless the federal government steps in as it did during COVID-19 with vaccines.

Journalists can check in with the lawmakers who have introduced or sponsored this bill to ask about its prospects of becoming law. Here’s a list of the supporters of the House version of the bill and the companion Senate measure.

The PASTEUR ACT would build on a series of earlier initiatives intended to entice drugmakers to develop new antibiotics, addressing more directly a key dilemma with antibiotic stewardship, wrote Kevin Outterson of Boston University and co-authors in a March 2022 article in Health Affairs.

Previous “reimbursement changes have not had a significant impact on the antibacterials market because they still rely on robust sales of a product we hope to use sparingly,” Outterson and co-authors wrote.

They recommended trying to “delink” revenues from sales volumes using a type of advanced market commitment, Outterson and co-authors write. They noted that the PASTEUR Act would provide a 10-year subscription for a qualifying antibacterial or antifungal drug.

“The subscription would delink payment from volume for all US government payers, with government contracts offered that range from $750 million to $3 billion based on the clinical characteristics of the drug,” Outterson and co-authors wrote. “The intent of the incentive is for innovator companies to develop drugs identified by the Department of Health and Human Services as meeting the greatest medical need and with novel mechanisms of structure and action to combat superbugs.”