The U.S. Food and Drug Administration could bolster public trust in medicines through greater transparency about its decisions on when to seek expert feedback and its instructions to its advisory committees, argue members of a group that monitors the agency closely. Recent papers from Harvard’s Program On Regulation, Therapeutics And Law (PORTAL) can help journalists who want to dig more deeply into the question of when and how the FDA seeks advice on drug approvals.

In this blog post, we’ll first recap why the FDA staff would need to call on outside experts and then look at two recent PORTAL papers and offer suggestions for reporting on this topic.

Expert feedback, or why the FDA has advisory committees

The FDA staff often have a complicated task in trying to decide whether medicines are safe and effective enough for the U.S. market.

The agency expects pharmaceutical companies to present a good case through data on their medicines’ effectiveness and safety when seeking approvals. This usually involves taking drugs successfully through three stages of testing, Phase 1, Phase 2, and Phase 3, as defined in the graphic below. 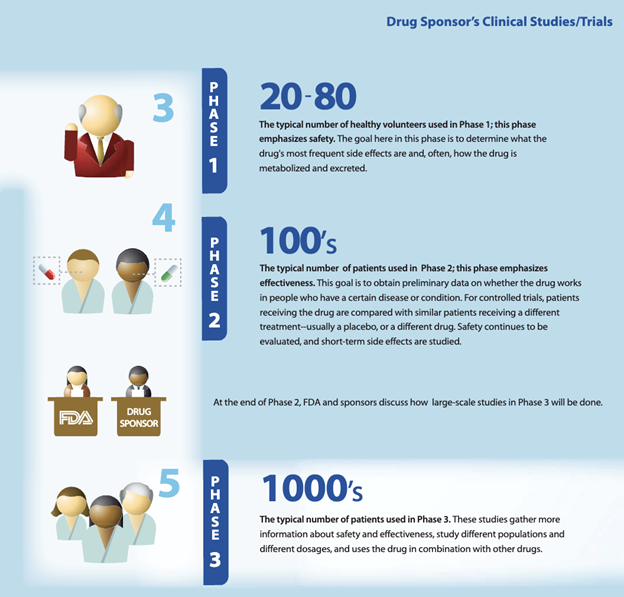 An excerpt of an FDA graphic

Sometimes companies present strong bodies of evidence to support the applications filed with the FDA.

Bristol Myers Squibb’s application for approval of its Sotyktu (deucravacitinib) drug for psoriatic arthritis, for example, rested on data from two successful Phase 3 trials (NCT03624127 and NCT03611751). In the Sept. 9 approval letter for Sotyktu, FDA staff said they had not convened an advisory committee about the application because it “did not raise significant safety or efficacy issues that were unexpected for a drug of this class.”

Other times, drugmakers seek approval based on smaller sets of data or for applications where results don’t make a clear-cut case for clearing the medicine for sales. In these instances, the FDA will convene a meeting of the relevant advisory committee.

The FDA also tends to schedule advisory committee meetings when a medicine uses a new approach to containing disease. In the early stages of introducing COVID vaccines, the FDA put applications for emergency use authorizations of these new products and then expansion of their use several times before the Vaccines and Related Biological Products Advisory Committee (VRBPAC).

The FDA has drawn criticism, though, for skipping VRBPAC review on certain expansion of authorizations of these shots. The agency thus missed opportunities for public debate on emerging science, which could help foster trust, wrote C. Joseph Ross Daval, J.D., Aaron S. Kesselheim, M.D., J.D., M.P.H, and Ameet Sarpatwari, Ph.D., J.D., in an August perspective article in the New England Journal of Medicine. All are affiliated with PORTAL.

“Under a narrow view, advisory committees exist only to provide the agency with additional information — an independent, multidisciplinary review to help the agency better understand the questions it faces. But advisory committees can also be seen as an indispensable part of science-led governance,” they wrote. “When an advisory committee provides its recommendations, it offers the FDA a chance to legitimize a decision by engaging in transparent deliberation with experts from outside the political umbrella under which it works.”

Kesselheim is among the members of the FDA’s Peripheral and Central Nervous System Drugs Advisory Committee who resigned following the agency’s controversial decision to approve  Aduhelm for Alzheimer’s disease. That decision went against the recommendations offered by the Peripheral and Central Nervous System Drugs Advisory Committee, as discussed in the New York Times story. (For more background on Aduhelm, see these AHCJ posts: New Alzheimer’s drug draws attention from federal, independent groups (7/8/21), Tips for covering Medicare’s plan to limit coverage of controversial Alzheimer’s drug (1/25/22).)

The FDA isn’t obliged to accept the recommendations of its advisory committees, although it often does so.

In the cases where it doesn’t, having held an advisory committee meeting should provide the public with greater details about a product, as these meetings force “the agency to make its reasoning plain,” Daval, Kesselheim and Sarpatwari wrote.

More reluctant to seek outside advice?

In a May paper in Health Affairs, titled Unwanted Advice? Frequency, Characteristics, And Outcomes Of Negative Advisory Committee Votes For FDA-Approved Drugs, Daval, Sarpatwari and Kesselheim reported that the agency appeared to be growing less likely over the years to convene advisory committees for medicines.

Even excluding the potential effects of the pandemic, there appears to have been a drop in the use of outside counsel. Of the 46 new drug applications included in the PORTAL study for 2017, only four were put before a panel. In 2019, the FDA convened six meetings for 48 relevant applications, meaning 13% of these medicines were put up for public scrutiny via advisory committees before approval.

And there’s notable inconsistency in how the FDA frames questions posed to its advisory committees, Daval, Sarpatwari and Kesselheim wrote. They urge the FDA to be more transparent about the use of advisory committees, especially in cases where the agency ultimately rejects the committee’s advice.

“Through meaningful reforms, the FDA can better ensure public trust in its decision to allow a drug to market, especially when an advisory committee has recommended otherwise,” they wrote.

In the August NEJM paper, titled “Improving the Use of FDA Advisory Committees,” Daval, Kesselheim and Sarpatwari examined the agency’s September 2021 VRBPAC meeting. This was held regarding the authorizing a third dose of the Pfizer-BioNTech COVID vaccine.

“At the end of the meeting, the experts voted against the proposed authorization — for all persons 16 years of age or older — by a wide margin (16 to 2). The FDA then asked for a vote on a different question that wasn’t on the original agenda: whether the agency should authorize a third dose for people 65 years of age or older and those at high risk for severe Covid-19. The advisory committee voted unanimously (18 to 0) in favor of this authorization, and the next week the FDA issued an emergency use authorization for those groups,” Daval, Kesselheim and Sarpatwari wrote.

In their view, the addition of the “last-minute question after the negative vote” fostered an impression that the FDA was angling for a “yes” vote to better align with the Biden administration’s promise of “boosters for all.” They noted that the FDA later expanded eligibility to all adults in November, then 16- and 17-year-olds in December, without consulting VRBPAC.

“But the malleable role of advisory committees in these decisions contributed to a general lack of clear messaging about the utility of the vaccines and raised broader concerns about the basic purpose of FDA advisory committees,” Daval, Kesselheim and Sarpatwari wrote.

In an email to AHCJ, Sarpatwari offered tips for reporters covering the FDA’s decisions on medicines. He suggested paying attention to how the FDA develops the questions posed for its advisory committees. Journalists should also look for reported conflicts of interest of advisory committee members over time, to monitor voting patterns.

Please see the AHCJ’s tip sheet on covering FDA advisory committee meetings. Also, if you are new to covering the FDA, consider taking the free online course PORTAL developed on the topic.