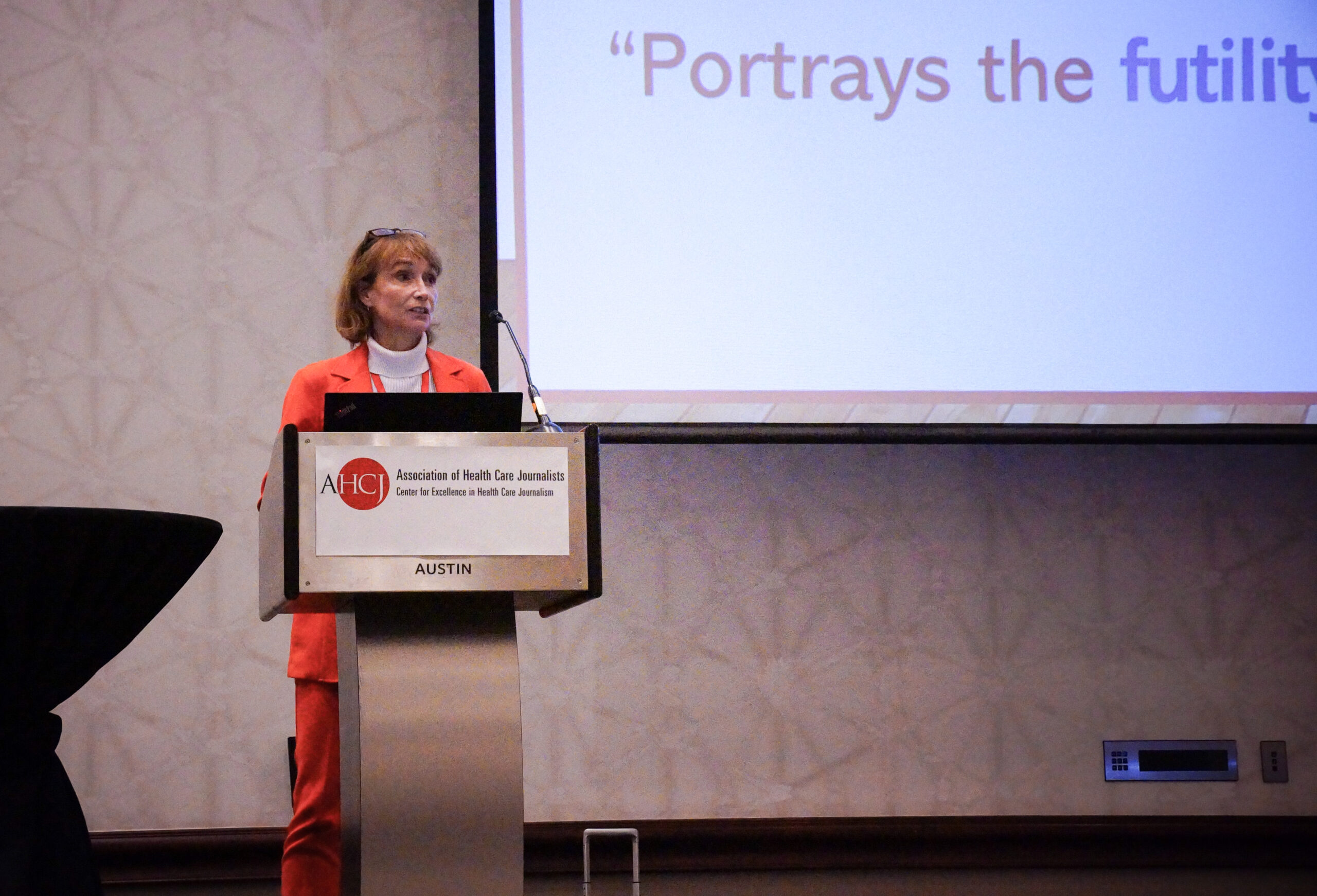 In pharmacies across the country, sticker shock is not uncommon. The high price of prescription drugs is one of the biggest problems facing the nation’s health care system, Joyce Frieden explained on Friday, April 29, during the “Covering the controversy over high prescription drug costs” panel at Health Journalism 2022 in Austin.

Each speaker offered a different perspective as to why prescription medications cost so much. Frieden’s expert panelists included Douglas Holtz-Eakin, Ph.D., the former director of the Congressional Budget Office (CBO) and current president of the American Action Forum, a center-right think tank on fiscal policy; Madelaine A. Feldman, M.D., a clinical assistant professor at the Tulane University School of Medicine, a practicing rheumatologist and president of the Coalition of State Rheumatology Organizations; and Gerard Anderson, Ph.D., a professor of health policy and management and international health at the Johns Hopkins Bloomberg School of Public Health.

“So, what is being done to solve the problem of high prescription drug costs?” asked Frieden, the Washington editor for MedPage Today. “And are there angles to this story that have yet to be fully covered today?”

Holtz-Eakin began by talking about one of his frustrations with the usual coverage of drug costs. “When we talk about the high cost of prescription drugs, it’s important to be precise about which price we’re talking about,” he said. Too often journalists do not distinguish between the costs of brand-name and generic drugs or between the net price of drugs after rebates and discounts. Also, we often fail to write about the actual cost at the pharmacy counter and what consumers pay out of pocket, he noted. “Being clear about which price you’re trying to keep track of matters a lot,” he said.

One reason such distinctions are significant is that about 90% of prescriptions in the United States are for generic medications, and the remainder are for brand-name drugs, he said. Another reason is that a CBO report earlier this year revealed that the average cost of prescriptions from 2009 to 2018 in both Medicare and Medicaid was essentially unchanged, Holtz-Eakin said.

In January, CBO published the report, “Prescription Drugs: Spending, Use, and Prices,” in which researchers examined trends in nationwide spending on prescription drugs from 1980 through 2018 and analyzed trends in spending, use, and prices in the Medicare Part D and Medicaid programs from 2009 through 2018.

Sales of generic medications are rising because they cost less than brand-name drugs, and their prices have dropped in recent years. “So be careful about where you are in the drug-pricing landscape because there isn’t a single one-size-fits-all pricing problem in the United States,” he said. “It’s a more subtle and complicated issue.”

Journalists could also provide more nuance in reporting on the effect reducing drug prices would have on drugmakers’ ability to develop drugs, Holtz-Eakin said. “It’s a very risky proposition to get into the development of drugs,” he noted. Getting one prescription medication to market can take 10 years on average and cost $2 billion to $3 billion, he added. “There’s a real concern that if you reduce the prices that manufacturers charge, that money [for drug development] won’t show up,” he explained.

In his presentation, Holtz-Eakin mentioned the high price of specialty drugs for patients with high-cost or chronic conditions, a topic that Feldman knows well. As a rheumatologist, Feldman prescribes high-cost drugs, which has led her to research the factors that drive up the cost of prescription medications for her patients. “Yes, we have amazing innovation [in drug development], but we also have a lot of problems with drug pricing,” she said.

Several trends in health care have driven up costs. One trend is health contracting with pharmacy benefit managers (PBMs) who then act as go-betweens from pharmaceutical companies to employers and from the drug makers to the health insurers themselves.

PBMs use tiered formularies or lists of drugs that health insurers will cover. Drugs on the lowest-cost tiers are preferred medications, meaning insurers will pay for most or all of the costs of those medications. Those on the highest-cost tiers require consumers to pay more of the total costs. “Among the factors that drive up costs, you can see that perhaps formulary construction has something to do with it,” Feldman commented.”

And, when PBMs set prices, they do so in an effort to win rebates from pharmaceutical companies seeking to gain placement on the lower formulary tiers that consumers prefer, she said. In her presentation, Feldman characterized rebates from drugmakers as kickbacks because rebates lead to preferred formulary placement, which leads to more drug sales, she said.

But rebates impact formulary placement only when more than one drug is offered in a certain category. If only one drug is available in a therapeutic category, there is no competition for formulary placement, and so, there is no rebate from drugmakers to PBMs, she said. Instead, the result is high drug prices, Feldman explained. But even when competition exists among drugmakers in certain therapeutic categories, PBMs charge want rebates from drugmakers, which pushes up the prices that consumers pay, she added.

“There is no actual sales price,” she said. Instead, drug manufacturers set list prices and then offer rebates to PBMs in exchange for preferred placement on formularies, she added. Feldman’s preferred term for rebates is kickbacks. “I call them kickbacks because kickbacks really are rebates in fees,” Feldman said. “And none of it is reported to the government. It’s a huge black box.”

“Everyone in the drug supply chain makes more money on higher-priced drugs,” she commented. “That means everybody wins except the patients.”

Regarding the role of PBMs, Anderson agreed with Feldman. “A PBM does not have the ability to negotiate with the drug company if there’s only one drug in that therapeutic category,” he said. “And so that’s where the most expensive drugs are. Those are the drugs that we need to do something about.”

In 2019, Anderson was named to the Maryland Prescription Drug Affordability Board. Several states have authorized such boards. In Maryland, the board would limit the costs that state and local government employers would pay for certain prescription drugs. If the board succeeds, its powers could be extended to other employers.

“Some state drug affordability boards have authority to collect data, and boards in other states have the ability to set up payment plans, not a price, but the amount of money that somebody would pay in that state,” Anderson explained. “We’re essentially going to set upper payment limits for state employees, and in the next year, we’ll do that for the general population.”

But first, the drug affordability board needs to determine which drug prices to address, he said.

1 thought on “Rising prescription drug prices: What to know”