Last fall, the U.S. House of Representatives narrowly passed a $2.2 million domestic spending plan called Build Back Better (BBB) that included several health care provisions including one that would limit what patients with diabetes would pay for insulin to $35 per month. One month later, Sen. Joe Manchin (D-West Virginia) effectively killed the legislation when he announced that he could not support the law. 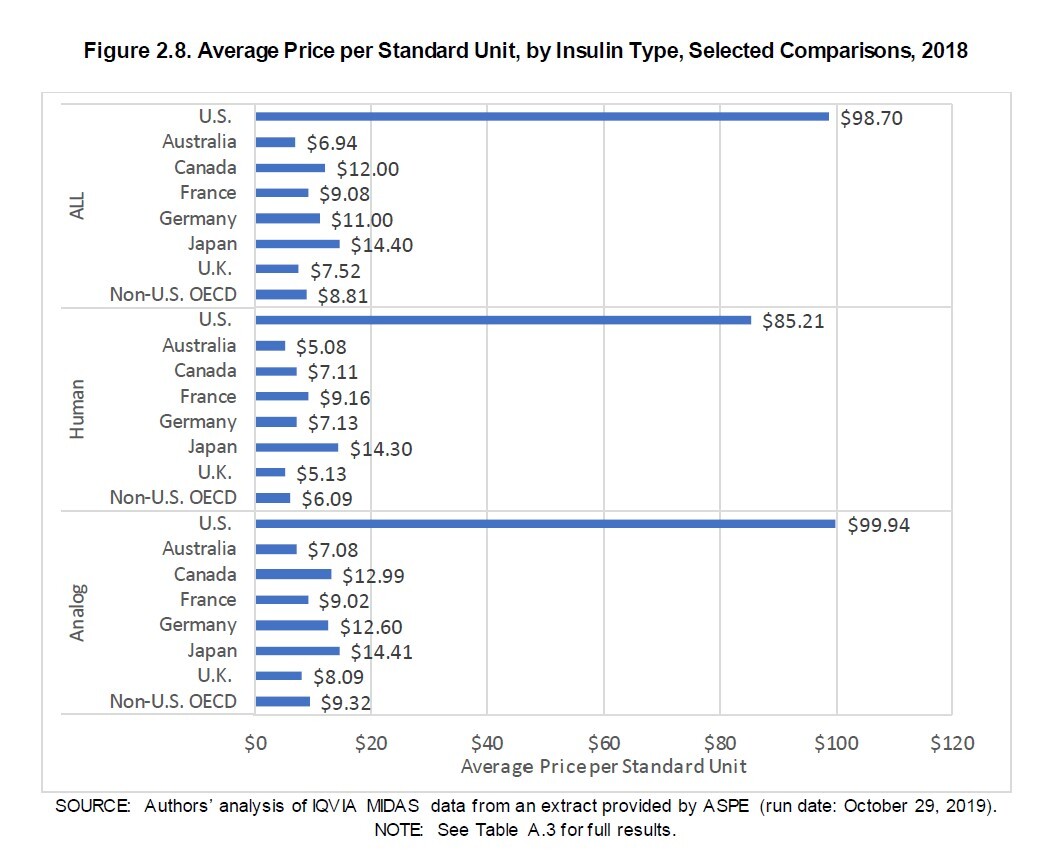 Source: Comparing Insulin Prices in the U.S. to Other Countries, Prepared for the Office of the Assistant Secretary for Planning and Evaluation at the U.S. Department of Health and Human Services by RAND Health Care. September 2020.

Efforts to cap what patients pay for insulin, however, are still under consideration in Congress; some legislation could pass in the coming weeks. If so, health care journalists will need to know how any new law would work. One useful source could be a report last week from the Peterson Center on Healthcare and the Kaiser Family Foundation (KFF), “Out-of-pocket spending on insulin among people with private insurance.”

For health care reporters, there are at least three important concerns to understand about  efforts to limit what patients with diabetes pay for their care.

First, putting a cap on out-of-pocket costs is crucial but amounts to little more than tinkering around the edges of the issue. Patients with diabetes need insulin and supplies to monitor their blood sugar and store and inject insulin. In 2020, researchers for the Commonwealth Fund reported that some 30 million Americans have diabetes, and about 31% of them need insulin to manage the condition. The list prices of many of the newest forms of insulin have risen by 15% to 17% each year since 2012, the report noted.

Second, it’s important to understand that any limit on what patients pay out of pocket for insulin would not address the underlying price of insulin in the U.S., as the Peterson-KFF report explained. What diabetes patients pay for insulin in the U.S. is much higher than it is in other countries, according to a report that the U.S. Department of Health and Human Services (HHS) issued in 2020. For that report, HHS contracted with RAND Health Care to compare what pharmaceutical companies charged for insulin in the U.S. in 2018 against what drug companies charged in 32 other countries that are members of the Organisation for Economic Co-operation and Development (OECD).

U.S. drugmakers often argue that they give rebates to patients, health plans, employers and pharmaceutical benefit managers. In their report, the RAND researchers accounted for rebates, showing that U.S. insulin prices were about four times higher than those in other countries.

Third, some journalists who have written about the efforts to limit what patients pay for insulin have incorrectly reported that the proposal in BBB would limit the price of insulin. The insulin provisions in BBB and now in other laws that Congress is considering would limit only what diabetes patients who have health insurance pay each month for insulin. Health insurers would still pay the full price for insulin, as Healthcare advocate for the State of Connecticut Ted Doolittle has explained on Twitter (@TedDoolittle2) and elsewhere, including in a February AHCJ webcast, “Reporting on the care and costs of diabetes.”

The Peterson-KFF lists the bills in Congress that would limit patients’ out-of-pocket spending for insulin, including the Ending Pricey Insulin Act, which Sen. John Kennedy (R-Louisiana) introduced last year and the Affordable Insulin Now Act, which Sen. Raphael Warnock (D-Georgia) introduced in February.

Last week, Reuters reported that Senate Majority Leader Chuck Schumer said he intends to hold votes this spring on a bill that would cap what patients pay for insulin at $35 a month. Also, Schumer added, the monthly cap would be paired with other plans to drive down what patients pay “in a more comprehensive way, including having the uninsured protected,” Reuters reported on Schumer’s comments.

A few days later, Forbes posted a video on March 26 of Schumer explaining his plan to limit what patients pay for insulin.

The Peterson-KFF report explains that the Affordable Insulin Now Act and the wording in Build Back Better would require insurers that offer Medicare Part D plans and health plans to charge no more than $35 per month for insulin products. Health plans for groups or individuals would have to cover at least one dose of each type of insulin (including premixed, rapid-acting, short-acting, intermediate-acting and ultra-long-acting) when available and limit the cost-sharing to no more than $35 for a 30-day supply of each type, the report explained.

A per-month cap of $35 on out-of-pocket costs for insulin could produce substantial savings for patients with diabetes who need insulin. More than one in 20 insulin users who have commercial health insurance pay more than $150 per month for their insulin, the report noted. For those who get health insurance on the individual market, the median savings would be $27 per month, and about 25% would save at least $71, the Peterson-KFF report showed.