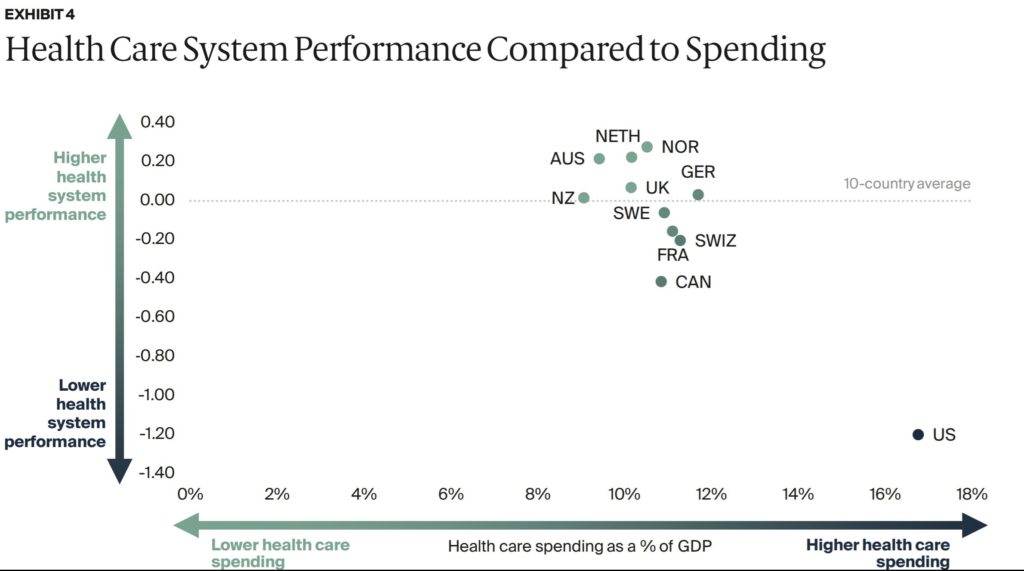 Traveling outside the U.S. anytime soon? If so, bring your notebook and camera because going to another country may be the best way to understand why the U.S. health system ranks last —again— among 11 large, high-income nations. You could go to any one or several of the 10 nations in the Commonwealth Fund’s recent report, Mirror, Mirror 2021—Reflecting Poorly: Health Care in the U.S. Compared to Other High-Income Countries.

Despite spending far more of our nation’s gross domestic product on health care than the other 10 countries studied, the U.S. ranks last in access to care, care process, administrative efficiency, equity, and health care outcomes. Each of the other 10 countries (Australia, Canada, France, Germany, the Netherlands, New Zealand, Norway, Sweden, Switzerland and the United Kingdom) all spend less, and their citizens get far more, the report showed. Since 2004, the United States has ranked last in every edition of the report, the fund noted in a news release.

In recent years, health care journalists have done excellent reporting on how patients experience care outside of the U.S.

Two years ago, for example, Noam Levey wrote a series for The Los Angeles Times on high patient costs, explaining that one metric that sets the American system apart from others is how much patients pay out of pocket for medical care, even if they have insurance.

“In France, a visit to the doctor typically costs the equivalent of $1.12,” he noted. “A night in a German hospital costs a patient roughly $11.”

In this video from Arnold Ventures, Levey (who now writes for Kaiser Health News) discusses his work on the series and what he learned from patients, physicians and other providers in Europe. Note that in 2019, Levey was an AHCJ International Health Study Fellow, a six-month program that the Commonwealth Fund supports.

Last year at this time, William Brangham and Jason Kane reported a series for PBS News Hour comparing the U.S. health care system to that of three nations that provide inexpensive and universal health care to their people: Australia, Switzerland and the United Kingdom. In the opening segment of the series, they addressed the question of whether the health care system in the U.S. is the best or the least effective in the modern world.

Early last year, Tara Golshan, Ezra Klein and Dylan Scott at Vox traveled to four countries to report on the health systems in Australia, the Netherlands, Taiwan and the United Kingdom. For a series of reports called Everybody Covered, Golshan, Klein and Scott interviewed physicians, patients and government officials.

Both the Vox and PBS News Hour series were supported by the Commonwealth Fund.

For a different take, see the six-part series that health care journalist Taylor Knopf wrote for North Carolina Health News in 2018. Last year, Knopf wrote a “How I Did It” for AHCJ about how she used time during a family vacation to report the series called “Lessons from Abroad” which explored how European health care systems care for patients who use drugs. For her work, Knopf received grant funding from the Solutions Journalism Network.

Earlier this month, Canada opened its borders to fully vaccinated U.S. citizens and permanent residents, and in June, the members of the European Union began allowing entry to vaccinated Americans, as Afar magazine reported.

Most of us are probably putting off far-flung travel, for now. Fortunately, there are other ways to compare the U.S. system to those of other nations. The Commonwealth Fund itself can provide the names of experts in European countries and identify health policy experts who have participated in its Harkness Fellows program. Those fellows come from abroad to study and work in the U.S. health care system, according to Bethanne Fox, the fund’s vice president for outreach and strategy.

One more resource that may be useful is a report that the Council on Foreign Relations published last year, Comparing Six Health-Care Systems in a Pandemic in which researchers examined how those health-care systems contended with the coronavirus.