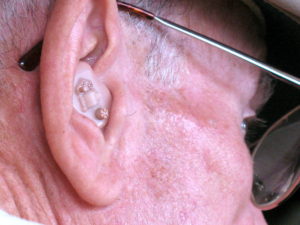 Losing some hearing or eyesight is fairly common as we age. However, a new study says losing function in both senses may increase risk of dementia and cognitive decline down the road.

Journalists may want to consider looking at any local programs that address vision and hearing loss in older adults and how, or if, these programs address challenges of cognitive decline or multiple sensory impairments.

In an analysis of people’s thinking and memory skills over a six-year period, researchers from South Korea found that dementia was more than twice as common in those with both hearing and vision loss than in people with one or no sensory impairment.

“Depending on the degree of hearing or vision loss, losing function in your senses can be distressing and have an impact on your daily life,” said study author JinHyeong Jhoo, M.D., Ph.D., of Kangwon National University School of Medicine. “But our study results suggest losing both may be of particular concern.”

Jhoo and her colleagues looked at 6,520 people between 58 and 101. Visual and hearing impairment was self-reported, through a questionnaire asking about using glasses or hearing aids. People rated their hearing as “normal,” “reduced, but able to communicate without a hearing aid,” “difficult communicating with a hearing aid” or “no hearing at all.” People rated their sight as “normal,” “reduced, but able to view newspaper or TV without wearing glasses,” “unable to view newspaper or TV with glasses” or “no sight at all.”

At the start of the study, 932 people had normal seeing and hearing, 2,957 had either visual or hearing impairment, and 2,631 said they had both impairments. Thinking and memory skills were evaluated every two years using word recall and recognition tests. Researchers then analyzed the relationship between having either a hearing or vision impairment and dementia and having both impairments and dementia.

After adjusting for factors like sex, education and income, researchers found that the group with both hearing and seeing impairment were twice as likely to develop dementia than the group with normal sensory function. People with just one impairment were no more likely to develop dementia than those with normal sensory function.

Researchers also found the decline on thinking test scores was steeper among people with both hearing and vision impairment. Their conclusions agree with other recent studies like this one of Medicare beneficiaries, which also found that dual sensory impairment in older adults was associated with increased risk of dementia.

Jhoo says that further research is needed to explain why people with two impairments have a greater risk for dementia than those with one. Interestingly, other investigations, like this 2015 population-based study, did find that elderly individuals with hearing loss also may be more likely to develop dementia sooner, compared with than their non-hearing impaired counterparts.

“Older people with only a visual or hearing impairment can usually still maintain social contact, so they may not feel be as isolated or depressed as people who have both impairments,” Jhoo said. “However, when someone has both impairments, that may increase the risk of isolation and depression, which previous research has found may affect dementia risk and thinking skills later on.”

One limitation of the study is that participants completed a questionnaire about their hearing and vision, and were not objectively assessed for sensory decline by clinicians. Not having objective measures of people’s hearing and vison could have affected the study results researchers noted.

The research was published in the April 7, 2021, in the online issue of Neurology.