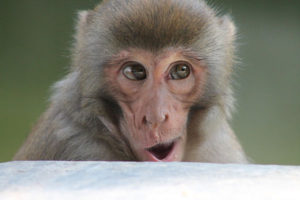 At a certain point, you think you’ve seen all of those maddening, intentionally misleading Facebook math riddles. The first one I recall led to an unfriending on Facebook — and my first article for Slate. It discussed the history of “order of operations” and the ambiguities of math “language” (and amusingly led to just as much debate in the comments as on Facebook).

Since then, I’ve mostly skipped over them — until I saw the one about counting animals heading to the river. Have you seen it? I immediately recognized not only its familiar ambiguity, but also its potential as a great tool for demonstrating how to think critically about a medical study.

The allegedly “correct” answer is five: Supposedly, the elephants are only observers (of the monkeys), and all of them see the two monkeys, who each have one parrot. So, one rabbit, two monkeys and two parrots equal five animals.

I did not get five. My first gut-reaction answer was 25: One rabbit plus 12 monkeys (two seen by each of six elephants) plus the 12 parrots, each carried by a monkey, equaled 25 animals. But as I went to put my answer on my friend’s post, I saw the five responses and quickly realized that the elephants could have all seen the same two monkeys.

Clearly, the question contained insufficient data to determine the answer. We have no idea how many monkeys — anywhere from two to 12 — the elephants see, so we can’t determine the total animals. Ever the nerd, I thought of my answer in terms of a quasi-confidence interval of 5-25.

I smugly left a comment on my friend’s post that the answer could be any odd number (the rabbit plus the couplings of monkeys and parrots) between five and 25. Then I showed it to my husband, who pointed out that the elephants could be going toward the river. No, the riddle didn’t say they were. But it didn’t specify they weren’t either. And you know what they say about assuming …

In one sense, this problem is a demonstration of what happens with poor, or at least imprecise, communication. But what if it’s not so much imprecise communication, but simply a lack of adequate data? Often, published medical studies include all the data available, but the data set remains incomplete. Maybe the researchers had no way of knowing whether the elephants were headed toward the river or not — much as we don’t often know whether an association involves causation, or which direction that causation might go.

So I shared the problem myself on Facebook to see what other issues with the riddle my critically thinking friends noticed. And there are quite a few. Let’s say this problem represents a study. Here is a list of questions you should be asking the author:

At this point, you think I’m crazy for overthinking this to the point of ridiculousness, but in a way, this is the level of critical thinking you need to apply to every study you encounter. What data are missing? What did the researchers not take into account? What assumptions might the researchers be making? What are confounders that could influence the interpretation of the data? What are the biases that could interfere with accurate interpretation?

And finally, why is Animals capitalized? Really, it could be that no animals at all are headed to the river. Maybe they’re all waiting for the concert to start.