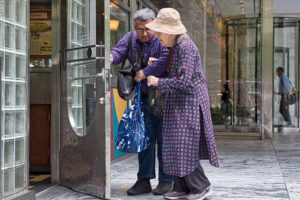 The Trump Administration’s proposed $4.8 trillion budget for fiscal 2021 features plenty of reductions to spending for Medicare, Medicaid and Social Security. Naturally, this has Democrats and elder advocates up in arms.

The proposal would slash Medicare by $850 billion, Medicaid by $920 billion and Social Security by $30 billion over the next decade, according to The Washington Post. It also includes cuts to Children’s Health Insurance programs, despite previous statements by the president that entitlements would remain untouched.

The Department of Health and Human Services would see its budget cut by 9 percent. It also includes changes to the Supplemental Nutrition Assistance Program (SNAP) — the administration says the program “has been streamlined to remove eligibility loopholes and improve program integrity.” About 4.7 million older adults (age 60-plus) are enrolled in SNAP, according to the National Council on Aging (NCOA). Currently, this figure represents less than half of the eligible population.

“The president is now brazenly inflicting savage multi-billion-dollar cuts to Medicare and Medicaid — at the same time that he is fighting in federal court to destroy protections for people with pre-existing conditions and dismantle every other protection and benefit of the Affordable Care Act,” said Nancy Pelosi, according to this Washington Times story story.

An analysis from the Center for Budget and Policy Priorities highlights some other changes. There would be a new post-acute care payment system, an extension of the Medicare sequestration cuts, and site-neutral payments for all physician and outpatient services. Forbes contributor Elena Botela explains that Medicare cost-saving efforts also could include requirements like “prior authorization” a key feature of Medicare Managed Care plans, and a push to use more nurse practitioners and physician assistants to deliver routine care. Overall the projected Medicare cost savings are estimated at roughly $756 billion over 10 years.

“One of the concerns is that doctors dissatisfied with still lower rates could cut down on the number of Medicare patients they accept or stop accepting Medicare entirely,” Lindsay Copeland, federal policy director of the Medicare Rights Center, said in an interview with Philadelphia Inquirer reporter Sarah Gantz.

In a live interview on KHN’s What the Health podcast, former HHS Secretary and current U.S. Rep. Donna Shalala (D-Fla. 27) described the proposed budget as “evil” for its extensive cuts to entitlement programs, the CDC and NIH. “It’s easy to say it’s dead on arrival, but it sets a tone for the campaign that’s ahead,” Shalala said.

The episode also features reporters Rebecca Adams of CQ Roll Call, Paige Winfield Cunningham of the Washington Post and AHCJ topic editor Joanne Kenen of Politico. As an aside, it’s worth listening to the entire podcast for updates on other health policy issues of importance to older adults, including drug pricing and surprise medical bills.

The budget is a “mixed bag,” when it comes to elder justice issues, according to Bob Blancato, national coordinator of the Elder Justice Coalition. Among the proposals: it would eliminate Social Security Block Grant funding, the primary source of federal funding for adult protective services, and cut $2 million from the Long-Term Care Ombudsman Program, which is more than 10 percent of its current budget, EJC says.

However, it does provide funding for several key initiatives, including $5.8 million for locally based elder justice coordinators in U.S. attorney district offices, a program created through the Grassley-Blumenthal Elder Abuse Prevention and Prosecution Act of 2017 (P.L. 115-70). There’s also a $1.2 million increase to pay more attorneys to pursue civil and criminal penalties for elder fraud and train partners in all levels of government, plus a $1 million increase for the VAWA Abuse in Later Life Program.

Blancato said in a statement that the EJC’s priorities in working with Congress would be to maintain funding for the block grant program of at least its current $1.7 billion and increase —not cut — funding for the LTC ombudsman program.