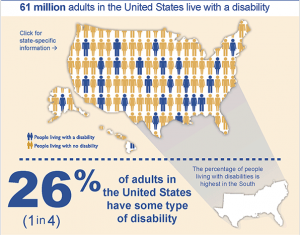 What do depression, diabetes, dyslexia, prosthetics, hearing loss, obesity and heart disease all have in common? All are considered disabilities or associated with increased risk of disability. About a quarter of American adults have some type of disability, according to the U.S. Centers for Disease Control and Prevention, including two in five adults over age 65.

Leading individual risk factors associated with disability in the U.S. include obesity, smoking, heart disease and diabetes, and rates are highest overall in the South (which also has the highest rates of those risk factors).

The majority of medical studies journalists cover involve conditions that are either considered disabilities in and of themselves or else increase the likelihood of disability. It’s therefore helpful to be familiar with resources for data on disability, whether your story is focused specifically on disability or not. Stats can also come in handy when writing about politics and policy that directly or indirectly affects people with disabilities (which is probably a lot more policy and legislation than most people realize).

A new entry in the data section of the Medical Studies Core Topic contains a wealth of resources on disability data and statistics, including sources such as the U.S. Department of Labor and Bureau of Labor Statistics, the U.S. Census Bureau, the VA, the CDC, the Social Security Disability Insurance program, Pew Research and several independent or university-based organizations.