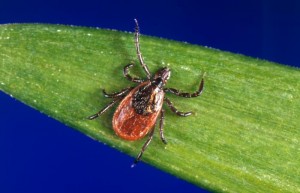 Ticks are emerging earlier from winter hibernation and remaining active for more weeks of the year as the climate is warming, according to public health experts. The result is that Americans’ risk of infection from pathogens carried by the outdoor pests is increasing.

The CDC recorded 59,349 cases of tick-borne illnesses in 2017, and there were likely 10 times more cases, since cases of diagnosed Lyme disease (the most common tick-borne disease) often don’t get reported to the CDC, according to the agency’s own assessment of medical records and other data.

Climate and deforestation is likely to expand those numbers over time, as the geographic habitat for ticks expands into more areas of the United States.

Black-legged ticks (also called deer ticks) traditionally have thrived in forests in the Northeast, central north Midwest and in the mid-Atlantic, where people also were at risk of getting tick-borne diseases. But as the weather has gotten warmer sooner in many areas of the country, the tick has spread farther south, west and east. This CDC map shows how quickly Lyme disease has spread since 2012.

Quartz’s Gwynn Guilford explains in more detail why climate change and destruction of the forest matters in this July 2015 story that describes how ticks hatch in the spring into nymphs. The nymphs, no bigger than a poppy seed, need to feed on blood to stay alive. Among their favorite hosts are white-footed mice, which often carry the pathogens that cause Lyme and other diseases. Once done feeding, the nymphs will jump onto deer and people.

As humans have built more homes near and forests and eliminated predators to mice, the risk of Lyme disease has grown. As spring comes earlier each year, there are more nymphs hatching, ready to feed on mice and people.

Ostfeld has been studying mice populations for 25 years to gauge Lyme disease risk for those living in the Northeast. For 2017, Ostfeld predicted it would be a bad year for Lyme, and he was correct. For 2019, he expects people in the Northeast to be at an “average” risk for getting Lyme disease.

“That isn’t to say that people should relax,” Ostfeld said. “The risk is always high, but some years are worse than others.”

A clearer picture of just how at risk Americans may be tick-borne diseases is likely to develop in the next few years. For the first time, the CDC this year will be monitoring not only the number of human cases of tick-borne diseases, but also the ticks themselves and the pathogens they carry.

Another factor in the growing risk of tick-borne diseases is that there are a growing number of new ticks emerging in the environment. The Asian longhorned tick was found just a few years ago in New Jersey and it has already spread to 10 states. Though it has not yet to be found carrying a pathogen dangerous to humans, it has been shown to carry Lyme in other countries. The tick also can reproduce without a mate and is so prolific that they can bleed livestock to death.

As reporters look for stories to cover tick season this year, here are a few resources: