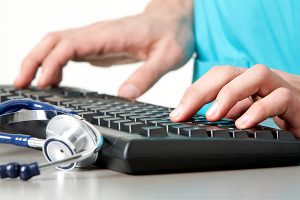 Artificial intelligence (AI) is one of the hottest topics in health care and it has the potential to transform care delivery in hospitals, clinics and in the home.

The Health Journalism 2019 panel “Hope vs. Hype: Reporting on AI” offered some examples where AI is being applied to medical care today. It also tapped the brakes on some of the hype.

Doug Fridsma, president and CEO of the American Medical Informatics Association, used the analogy of city planning versus architecture when talking about AI in medicine.

“We have to think about not just the technological capabilities but also the social implications,” Fridsma said. That includes considering inherent bias in data sets that are the foundation for AI applications, and whether AI applications are created for the benefit of society. If technology is building construction, the application of that technology should be about planning to create a flourishing ecosystem where everyone can benefit, he said.

When reporters are evaluating a pitch on a new AI application, or observing how a hospital is using AI for a specific population or disease condition, they should ask what problem this technology is trying to solve, advised Elliot K. Fishman, M.D., director of diagnostic imaging and body CT at Johns Hopkins.

Fishman has made headlines in recent years for his project to harness AI for earlier detection of pancreatic cancer. In his presentation, Fishman explained how he and his team have taught computers over several years to draw the human pancreas and, later, to detect with more than 95% accuracy solid tumors in the pancreas.

One of the most exciting applications of AI is to address the problem of human error in medicine, Fishman said.

“Human error is inevitable so the question is ‘how can we do things better knowing our limitations?’” he said.

Machines also can be taught to pick up cues that humans miss to help other conditions earlier, namely ALS, or Lou Gerig’s disease.

Robert Bowser, chair of neurobiology at the Barrow Neurological Institute in Phoenix, described an at-home speech application that the institute developed. Researchers asked ALS patients to speak into the device, and then they created a computer program to analyze the results and look for patterns. They found that the computer picked up early signs of speech problems associated with ALS before patients and family members noticed this common symptom.

“The algorithm could quickly differentiate between the patient with early ALS who reported no speech problems with patients in the control group who did not have ALS,” Bowser said. The Barrow Institute is using the tool as an early biomarker for ALS and is exploring other uses, such as an outcome measure for clinical trials.

AI is advancing at such a rapid pace that it can be challenging for reporters and clinicians to keep current with the technology. One of the biggest issues is finding enough computer scientists who will work at hospitals and health systems to create applications that work on specific problems in medicine, the panelists agreed.