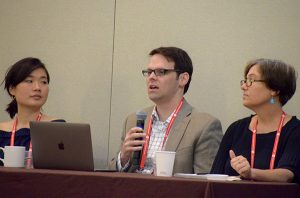 While their hearts and training may lie with traditional objective journalism, many freelancers take on additional writing assignments in order to make ends meet. But when do these non-journalistic jobs present real or potential conflicts of interest with journalism?  How should writers and their editors address the ethical questions that may arise? In an evolving media landscape, how do freelance journalists maintain objectivity – and integrity – while paying the bills?

Attendees who gathered in Baltimore for AHCJ’s Health Journalism 2019 learned tips for handling the challenges in the session “Freelancer ethics: How to avoid conflicts and still make a living.”

When it comes to weighing the possibility of conflicts between journalism and outside or prior jobs, transparency is the best policy, according to panelist Brendan Maher, biology features editor for Nature News.

But it is important for writers and editors to deal with issues frankly, because so much is at stake. When weighing cases of potential conflict, Maher said he applies this rule of thumb:

“I try to dial it up to 11. Imagine how your worst enemy will perceive it. Someone who wants to take you down.”

Panelist Eva Emerson, editor-in-chief of Knowable Magazine also urged freelancers to be up-front and candid with editors in discussing any personal and organizational ties, as well as other work they have done that might represent potential sources of bias. Sometimes an editor will decide that a relationship does not disqualify a reporter from writing about a topic, but that it should be disclosed in the article.

“I don’t believe anyone is completely unbiased,” Emerson said. But to protect professional reputations and journalistic standards “we need to be completely transparent about any bias we do have.” 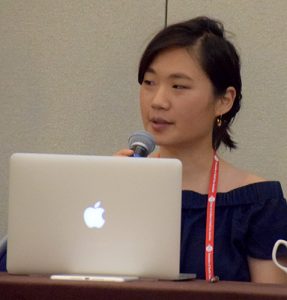 Photo: Pia Christensen/AHCJWriter Jenny Chen works to keep a clear line between her journalism and the writing she does for companies and organizations.

Panelist Jenny Chen, a science writer and multimedia producer said she has worked to keep a clear line between her journalism, which has appeared in publications including The Atlantic and the Washington Post and the writing she has done for companies and organizations including the Environmental Defense Fund and the Yale School of Medicine.

“I try to keep my topic separate,” she said. “I always have a conversation with my editor.”

If the line between her non-journalism work and the idea for a new reporting project ever feels blurry, “I have to sit on my hands or give it to another journalist,” Chen said. “I usually go with my gut.”

Similarly, panelist and independent journalist Kendall Powell, who defines her field of interest as “the vagina beat” said she steers clear of taking commercial writing assignments that might appear to overlap with her reporting on reproductive health.

She said there is too much to lose to do it any other way.

“As a freelancer,” she said, “you only have your reputation.”

“When you accept a grant you should know where the money comes from,” he cautioned. “You have to be very diligent about it.”

For reporters who continue to mull these questions there are resources out there, panelists noted. For one thing, Maher said, the Society of Professional Journalists maintains a helpful ethics hotline.

And for another, Powell added, the Science Writers’ Handbook includes a chapter dedicated to such ethical quandaries. In the interest of full disclosure, she was quick to say that she contributed to the book.