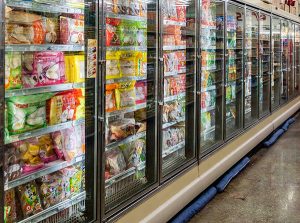 These recalls got a lot of media attention, but the biggest recall of all in 2018 got little, according to Sam Bloch, a reporter for The New Food Economy, who wrote “The biggest food recall of 2018 is one you still haven’t heard about.”

The January 2019 story notes that the largest and record-breaking recall of the year was initiated by an Ontario, Canada, food service company called McCain Foods, which pulled more than 100 million pounds of potentially salmonella- and listeria-contaminated products over six weeks in October and November 2018. Yet until Bloch, there had been little news coverage about McCain Foods.

Bloch found the story when he started a “year in review” article for his publication. To get data for his piece, he culled through food recall data that had been publicly posted on the websites of the Food and Drug Administration and U.S. Department of Agriculture during 2018.

“There was some media coverage of the McCain recall in October [2018], when it caused Whole Foods, Walmart and other grocery stores to recall packaged salads, wraps and burritos, but then the coverage stopped,” Bloch said in a “How I Did It” piece for AHCJ. “As I was working on a year in review story in December 2018, and I found out that the [McCain] recall went far beyond the salad recalls. There were 30 to 40 entries related to McCain.”

The story was a perfect fit for “The New Food Economy,” an online nonprofit publication founded in 2015 that aims to focus attention on stories about the changing food system that many in the media are missing.

“We are offering stories related to what everyone is talking about but not about the why,” said Bloch. “So the McCain story is a good example. There were stories about the recall of prepared salads, but not ‘why’ the salads were being pulled.”

Bloch’s recall story highlighted how many prepared and frozen foods for sale in supermarkets rely on commercial ingredients, such as processed fruits and vegetables, in their finished products. Yet the public probably doesn’t know how many frozen and ready-to-go-meals rely on manufactured ingredients that could be contaminated.

“You can have a problem at one plant and its tentacles can spread through the food supply into all kinds of products,” Jory Lange, Houston-based food lawyer told Bloch. “It’s a problem because no one’s ever heard of McCain Foods.”

Bloch tried to reach officials at McCain Foods, and government regulators for comment, but was unable to reach anyone. A stumbling block was that the federal government was shut down as Bloch was reporting his story.

“Among my obstacles was that no one wanted to talk to me,” Bloch said.

He is continuing to work on the McCain story and its impact. Since his story ran, McCain announced it was closing the Colton plant and laying off its 100 workers.

“Why are we having all these recalls?” Bloch said. “What my sources are telling me is that the FDA and the USDA are getting better at detecting and tracing food-borne illness. I also have a suspicion that it is more than that too … it’s a suspicion, but many people I have talked to believe it is the consolidation of food production. If you own every part of the production chain, you will hold yourself to a lower standard.”

To read more about Bloch’s reporting and how to track food recalls, read his “How I Did It,” here.