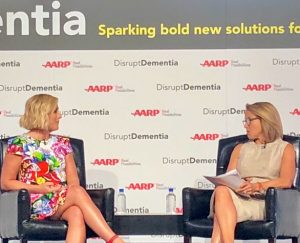 Photo: Liz SeegertActress Jane Krakowski, talking to Katie Couric, teared up as she spoke about her dad’s diagnosis of early onset dementia at age 61.

Alzheimer’s disease is the sixth leading cause of death in the U.S. Despite decades of research, there’s still no cure, and few options to slow or minimize symptoms. The last Alzheimer’s drug was approved more than 15 years ago, but a new campaign, called Disrupting Dementia, hopes to drive new diagnostics and treatments while also supporting patients and families affected by this devastating condition.

The key element of the campaign is an infusion of $60 million from AARP to the Dementia Discovery Fund (DDF), a specialist venture capital fund focused on developing new drugs for treating dementia, it was announced at a June 25 press conference in New York City.Additionally, UnitedHealth Group and Quest Diagnostics are contributing $10 million and $5 million respectively to this initiative. Since its launch in 2015, the DDF has invested in 16 drug discovery companies and projects.

With this new financing, the organization can continue seeking new scientific approaches and apply insights from other areas such as oncology and immunology to develop novel dementia drugs, according to Kate Bingham, a DDF Managing Partner. The DDF was formed through the collaboration of several major pharmaceutical companies (Biogen, Eli Lilly and Company, GSK, Johnson & Johnson, Otsuka (Astex), Pfizer and Takeda, the UK Department of Health and Social Care and the charity Alzheimer’s Research UK.

“The research field to date is dominated by the plaque hypothesis,” Bingham said. That theory focuses on the build up of amyloid plaque in the brain — something seen in people with dementia. The thinking is that drugs preventing or slowing plaque formation However, after hundreds of failed clinical trials, and no new drugs for dementia on the market in over a decade, many scientists think it may be time to test other approaches, as this Atlantic article explains.

“The fund will work to bring other research into drug discovery. We’re not funding core science but rather, applying the science to new drug development,” she said. The goal is to develop three to five new dementia drugs within the next 10 years.

AARP CEO Jo Ann Jenkins said that the investment represents “new hope” to find “innovative solutions that can reverse the trend of this health crisis and champion brain health.” A recent survey of U.S. physicians by the organization shows that doctors are very frustrated with the tools available to diagnose and treat dementia. One in three say current treatment options are poor; 62 percent cite lack of diagnostic tools as the greatest impediment to effective treatment and only 10 percent say they’re optimistic that an effective treatment will emerge in the next five years.

About 50 million people around the world have dementia. Some 10 million new cases of the disease are diagnosed annually, according to the World Health Organization. They estimate that Alzheimer’s, the most common form of the disease, contributes to 60 percent to 70 percent of dementia cases. In the U.S., the Alzheimer’s Association estimates that about 5.7 million people have Alzheimer’s alone, and that number is projected to increase to 14 million by 2050.

Finding ways to slow or halt progression of dementia has been a frustratingly slow process, explained Peter Pronovost, M.D., Ph.D., chief medical officer of UnitedHealthcare. “By the time someone notices the symptoms, the disease has been going on for years. The biology is complex and we need to understand it better.”

TV personality Katie Couric, who emceed the event, interviewed actress Jane Krakowski about her father’s battle with the dementia. Krakowski teared up as she spoke about her dad’s diagnosis of early onset dementia at age 61. “He could tell his brain wasn’t working like he was used to, and that he could no longer do his job properly,” she said. At one point, he could no longer remember his grandson’s name.

Her father was diagnosed with rapidly progressing vascular dementia. Unlike other forms of the disease, the drop offs in function and ability were huge, and happened quickly. “It’s incredibly painful to see someone disappearing in front of you,” Krakowski said. The experience was hard on the entire family, but particularly for her mother, as the primary caregiver. “It was both the emotional and physical stress, a 24-hour obligation.”

Krakowski’s father died in 2016 at age 77. She said her biggest wish is for new research that leads to a faster diagnosis, medicine that works and ultimately, a cure. “We need more research so we can get somewhere and not have to live through this long and painful process.”

Additional investment and data support will come from former Microsoft CEO Bill Gates, who invested $50 million of his own money into the DDF. In a video message, Gates said this initiative was “a turning point” in research to think creatively and to accelerate breakthroughs. Gates’ father suffers from Alzheimer’s. That diagnosis prompted the philanthropist to support new efforts to find a cure, he told CNN last year.

All of the prescription medications currently approved to treat Alzheimer’s symptoms in early to moderate stages are from a class of drugs called cholinesterase inhibitors, according to the Alzheimer’s Association. These include Aricept, Exelon and Razadyne. Memantine (Namenda) and a combination of memantine and donepezil (Namzaric) are FDA-approved for treatment of moderate to severe Alzheimer’s. None of the medications prevent the condition or reverse the damage it causes. However, these drugs can provide some symptom relief.