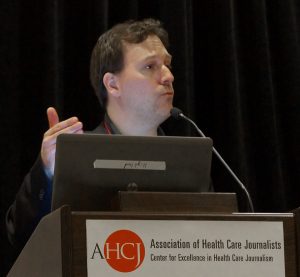 Last week, my colleague Rebecca Vesely covered his remarks for Covering Health. As she wrote, Carreyrou is a two-time Pulitzer Prize winning journalist at The Wall Street Journal who, in October 2015, started breaking stories about Theranos and its failed attempts to revolutionize blood testing.

Because today is the publication date for his book, “Bad Blood: Secrets and Lies in a Silicon Valley Startup,” I wanted to highlight the advice he gave about the need to have a lawyer on your side when doing investigative reporting.

Early in his work on Theranos, Carreyrou learned that the company’s legal counsel was David Boies, one of the nation’s best-known litigators. At the time, some of Carreyrou’s work was based on comments from a whistleblower, and he recognized that he would need the full support of his boss, Senior Editor Michael Siconolfi, and the newspaper’s lawyer, Jason Conti, who is now the general counsel and executive vice president of Dow Jones, the journal’s parent company.

Within weeks of making contact with the whistleblower, Carreyrou told Conti about the story and that attorneys from Bois’ firm, Bois Schiller Flexner, were threatening and harassing the whistleblower. Here’s his advice:

“I would recommend to all of you who are working on tough stories, that you know are going to be an uphill battle to publish in your paper or on your website, to bring the lawyers in at an early stage and make them feel like they’re part of the process.”

Doing so is much better than alerting them at the last moment because at that point lawyers may want to delay publication while they seek to understand the issues. “I found in this particular investigation, that bringing in lawyers very early was hugely beneficial,” he commented.

Later when he confronted Theranos with his findings, he got the runaround for about two months. “They had hired an outside PR guy and I kept asking for an interview and for a tour of the Theranos lab, and they kept putting me off,” he said. All the while, Theranos founder and CEO Elizabeth Holmes was frequently on television promoting her company, prompting Carreyrou to insist on a meeting.

“At that point a delegation of seven people came to the journal’s newsroom in midtown Manhattan, and of the seven people, four were attorneys, one was a PR person, one was an opposition researcher who co-founded Fusion GPS (the firm that commissioned the infamous Trump Dossier), and the seventh was a Theranos executive but not Elizabeth Holmes,” he said.

“We had a very heated and confrontational five-hour meeting in a conference room at the journal,” he added. Although he didn’t go into detail about the meeting, he was glad to have the support of Siconolfi and Conti. “I expected fireworks, and I was not disappointed,” he said, adding that we can read the details of that meeting in his book.