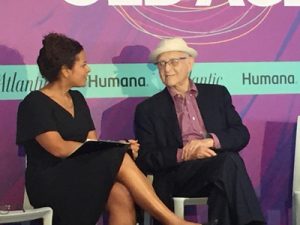 Norman Lear believes aging well has a lot to do with attitude. At 95, the producer, writer, director and activist is not slowing down. He just sold a new show to NBC, about – what else – aging.

Lear gave the keynote at “The New Old Age” forum on Oct. 4 in New York City, speaking at length about his career, aging and the current political climate. Guiding the discussion was Alison Stewart, contributing editor of The Atlantic, which was a conference co-sponsor.

Stewart asked what the term “old age” means to him. “Old is more of a cultural word than a personal word,” Lear replied. “The way the culture works, you wake up to be old. I wake up with things on my mind, and things I need to do, and I’m excited about it.”

While he understands that culturally that he is an older guy, and is conscious of his age, Lear said he doesn’t feel old: “I don’t wake up in the morning to be an old man.”

He doesn’t have time, he explained. Lear is too busy working on projects, such as his new sitcom set in a retirement community, “Guess Who Died.” Like most of Lear’s work, the comedy is culturally relevant. “The idea for the show goes back 30 years,” he explained, recalling that it initially was conceived as an animated show featuring leading actors such as Anne Bancroft and Kirk Douglas. The idea did not get the warmest reception from network executives, who laughed and said the topic was “not our demographic.”

There has been a sea change in our culture since that time, Lear said, because more people now realize that if we’re fortunate, we’re all going to reach an older age. “Suddenly, there’s great interest in this show,” he said, adding that he plans to tackle real-world storylines, such as Alzheimer’s disease, caregiving, relationships, and sex at older ages.

Just like “All in the Family” and “The Jeffersons” took on political and cultural issues of their day, another Lear offering, “One Day at a Time,” doesn’t shy away from current social issues such as feminism, homosexuality and ageism. This show is a Latino remake of the classic series that ran from 1975 to 1984, this time staring 83-year-old Rita Moreno as family matriarch.

One of Lear’s secrets to continued success is his ability to adapt to a changing media landscape. He records a podcast, has a deal with Netflix and is active on Twitter. He certainly has never been shy about his activism, only now he tweets about social issues:

Lear believes we live in a culture that suggests that aging is terrible, even though we want to do it. “People are susceptible to having a good time at any age,” he noted.

Wrapping up the interview, Stewart asked Lear about his secret to a happy life. “Two little words we don’t pay enough attention to,” he said. “Over and next.” When something is over, it’s over, and we’re all on to next. If there was a hammock between those two words, that would be the best definition of living in the moment. For Lear, aging is about appreciating what’s in front of you.