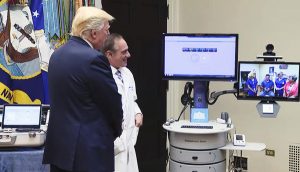 The announcement is notable because the initiatives remove some longstanding roadblocks to wider adoption of telehealth services. The VA has the largest telehealth program in the country, with an estimated 700,000 veterans using telehealth last year.

The three initiatives are:

Reaction from telehealth advocates was positive. The American Telemedicine Association, a leading trade group, praised the announcement, especially the medical licensure requirement rule. In a statement, the group encouraged the president to issue an executive order that eliminates the state-by-state licensure requirement for telehealth delivery for all federal programs, including Medicare.

Congress, too, is seeking to expand telehealth services. The Evidence-Based Telehealth Expansion Act of 2017, introduced by Reps. Doris Matsui (D-Calif.) and Bill Johnson (R-Ohio) on July 27, would allow the U.S. Department of Health and Human Services to waive current Medicare restrictions on telehealth coverage as long as it saves money.

Lack of reimbursement for telehealth has been for many years an impediment to adoption. As Congress and the president look for health care wins, loosening rules on licensure and reimbursement could gain traction. Here’s a roundup of Congressional bills on telehealth.