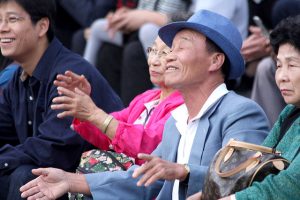 How are countries around the world adapting to the dramatic increase in their older populations? A new index provides some alternative context for measuring the health of aging inhabitants.

The Index of Societal Aging, created by researchers at Columbia University’s Mailman School of Public Health and the University of California’s Schaeffer Center for Health Policy and Economics, uses specific measures across five social and economic indicators, including an evidence-based metric to assess effectiveness over time and across many nations.

This tool provides a broader view than other available data of both current conditions and future population realities, according to John Rowe, M.D., who is a professor of health policy and aging at the Mailman School of Public Health. He led the interdisciplinary team of researchers.

“Other indices don’t include consideration of some important domains that we include, like equity – how even the distribution of resources are among elderly,” Rowe said in a phone interview. Some indices also omit the United States or focused solely on the European Union countries, making it much less useful for U.S. researchers and policy makers.

Norway, Sweden, U.S., Netherlands and Japan cope best with their aging populations overall, the index indicates. The United States ranks first when it comes to keeping older Americans productive. Rowe attributes this to the older retirement age here compared with other countries.

The United States is fourth among 31 nations tracked in keeping older adults engaged, thanks to a high rate of volunteerism. However, it falls short in health equity, ranking 16th, behind Estonia and Ireland. It ranks 12th in financial security, behind Slovenia and Poland.

Some results are skewed due to particular social or cultural quirks. For example, within the “cohesion” metric is intergenerational transfers, or how much people over age 65 give to younger people. “The U.S. looks very good on that measure, but one of the reasons is that much of the money grandparents give to grandchildren is for education, for college tuition,” Rowe explained. “In Europe, education is free.”

Financial security and health equity are two areas where the U.S. can do much better. Twenty-one percent of U.S. elderly are at risk for poverty, compared with just 2 percent in the Netherlands. Rowe said the index makes these inequities very clear in a very objective way. He described the gap between the haves and have nots as a “risky strategy for our society,” suggesting that policy makers focus more on where our deficits lie, rather than where the U.S. is leading the pack.

Index data primary comes from the Organization for Economic Cooperation and Development (OECD). The information is gathered annually, making it easy to update the aging index. More countries will be added to the index if there is enough useful data to include them he said. Not every country collects aging data, or if they do the metrics may not match up to what this index tracks.

Elements of the Index of Societal Aging include productivity and engagement, which measures connectedness within and outside the workforce. Also taken into account is:

An interactive feature enables website visitors to change the weighting of each element, which produces different rankings, depending on the particular measures emphasized. (Note: The index is supported by the John A. Hartford Foundation, which also supports AHCJ’s Aging Core topic area.)

Social determinants of health significantly contribute to health inequity. To calculate how that impacts your community, check out these resources in the Social Determinants core topic area.