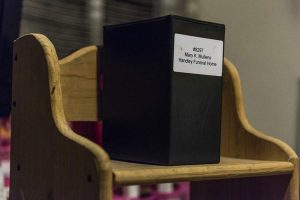 Lack of work, educational gaps, despair, overprescribing – there’s a host of reasons behind the nation’s opioid crisis. It may seem daunting to reporters who want to nail down the epidemic’s causes, but sometimes you just have to keep digging – literally.

West Virginia reporter Eric Eyre realized something was off when, during a trip to the state pharmacy board, he began digging through boxes filled with faxes from drug wholesalers reporting suspicious pharmacy activity. Eyre saw no indication that regulators in a rural state – with the nation’s highest drug overdose death rate – had acted on any of these reports.

Eyre’s months-long investigative work turned into an award-winning, data-driven series, “Painkiller Profiteers.” Published in December in the Charleston Gazette-Mail, the piece took a lot of other legwork as well, from pushing the courts to unseal records to FOIA requests and cross-referencing databases.

“The doctors, the pharmacists, the distributors, the manufacturers and the regulators (DEA, FDA, state pharmacy boards) all deserve scrutiny,” Eyre said.

“They have all played a role in the problem, but most seem to want to point the finger at anyone but themselves,”

His persistence paid off. Not only did Eyre win first place in AHCJ’s Awards for Excellence in Health Care Journalism for investigative pieces and a Pulitzer Prize for investigative reporting, but it also prompted reform efforts by pharmacy regulators and legislators.

While it may be too early to see how these changes may help save people in a state ravaged by opioids, the investigation got the attention of many. It has also brought common cause to Eyre and other reporters covering the crisis in their states, prompting journalists to consider ways to examine pharmacies, prescribing and oversight.

Eyre has written a new “How I Did It” essay for AHCJ members that provides some great ideas on how you can undertake similar investigations in your area. He also will be a panelist at our Rural Health Journalism Workshop 2017 on June 9 in Cincinnati.

“We’ve read many stories about prescription opioid addiction, but this one offered a new and exceptionally dark perspective by focusing on commercial distribution of the pills,” AHCJ judges wrote in rewarding Eyre for his work. His findings were “clear and compelling,” they added, commending the newspaper for supporting his reporting.