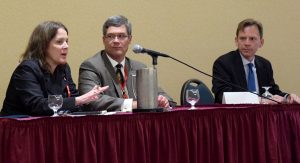 Photo: Pia ChristensenRandi Terry (left), of Munson Healthcare in Traverse City, Mich., explains some of the difficulties of complying with MACRA and getting clarification from CMS on the rules.

Any legislation is bound to have unforeseen outcomes, and the Medicare Access and CHIP Reauthorization Act of 2015 is no exception, according to two members of a panel discussion on MACRA at Health Journalism 2017.

Anders Gilberg, senior vice president of government affairs for the Medical Group Management Association, and Randi Terry, director of information services for Munson Healthcare in Traverse City, Mich., described some of those unintended consequences. Rebecca Vesely, AHCJ’s topic leader on health information technology, moderated the panel, “MACRA: The ins and outs of physician payment reform,” at Health Journalism 2017 in Orlando. In addition to Gilberg and Terry, the other panelist was Todd D. Grages, president and CEO of Methodist Physicians Clinic, who described how the clinic has been preparing for MACRA by implementing a patient-centered medical home.

Under MACRA, the federal Centers for Medicare & Medicaid Services established the Quality Payment Program for physicians and offered them two choices for participation: the merit-based incentive payment system (MIPS) or the alternative payment models (APMs).

“MACRA created a fork in the road of either MIPS or APM,” Gilberg said. “Currently, most physicians are in MIPS but we don’t want docs in MIPS for long. We want them in an APM because it gives them more autonomy.”

CMS required physicians to report their performance data under MIPS and APMs this year. That data will be used to pay bonuses to physicians in 2019, Gilberg said. Those who don’t participate may be penalized financially. Yet, MACRA is designed to be budget neutral, meaning the bonuses will need to equal the penalties each year, he added.

“If you don’t have a huge penalty pool, then your bonus pool dries up because it’s budget neutral,” he explained.

The problem with designing a budget-neutral mechanism is that physicians want to do well to get a bonus and yet many small-group practices may not be ready to make the changes needed to participate in MIPS or APMs, Gilberg cautioned. “CMS wants to get everyone into these programs, but doing so could exacerbate the haves and the have nots among physicians,” he warned.

To address this potential problem, MGMA and other physician organizations have called for changes in the rules governing MACRA. Those revisions may be proposed in the coming months so they can be implemented next year, he said.

As if on cue, Terry explained that Munson Healthcare is struggling to comply with MACRA, but CMS has so far failed to answer the questions Monson’s physicians have about implementing the program. Munson has nine hospitals in 24 counties in Michigan.

“We are in rural America and rural health care has a lot of challenges under MACRA,” she said. Over time, MACRA will help Munson Healthcare, but compliance with the rules is a challenge, at least since the law became effective on Jan. 1, she said.

“We don’t even know who’s qualified for MACRA,” she said. “We’re waiting for CMS to tell us who qualifies.”

The regulations were published in the MACRA final rule late last year, which was not enough time for Munson to establish the systems needed to gather the performance data it must report to CMS, she explained. “We don’t have our scores yet, and our vendors don’t have that data,” she said. “We don’t have the dashboards we need, and so we don’t have any data to report.”

Posing questions about MACRA to CMS also has been frustrating, she added. “They can answer easy questions,” Terry said. “But they struggled with hard questions. And don’t ask the same question twice because you’ll get a different answer each time.”

Rather than address the challenges of implementing MACRA, Grages of Methodist Physicians Clinic in Omaha, Neb., explained how the clinic has been preparing for value-based payment since 2012.

Based in Omaha, Neb., the clinic has 300 multispecialty doctors serving 305,000 patients in 24 locations in Eastern Nebraska and South Western Iowa. Among those patients, the biggest challenges are those who have chronic conditions. The clinic spends 50 percent of its $175 million budget to care for the top 5 percent of the most costly patients, he said.

The medical home allows the clinic to care for patients in teams and for all patients to have a health coach. “We are changing the way we take care of patients from episodic care to holistic care,” Grages said. In the medical home, the clinic aims to achieve what the Institute for Healthcare Improvement calls the Triple Aim: boosting the overall health of patients, lowering the cost of care and improving patients’ experience of care, he explained.

What is MACRA and what do reporters need to know about it?