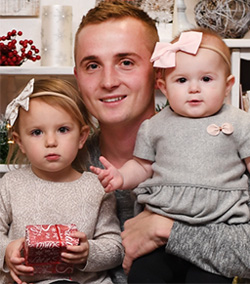 Vadim Anatoliyevich Kondratyuk and his daughters in an undated family photo before his death after complications from a dental infection.

The recent story of a young California husband and father who died after suffering complications from a dental problem serves as a sad reminder of the important ties between oral health and overall health.

Vadim Anatoliyevich Kondratyuk, 26, a long-haul truck driver, was headed east to New York when he started feeling pain in the lower left side of his mouth.

“He pulled over in Oklahoma to see a dentist, who diagnosed an infection and prescribed antibiotics,” recounted health reporter Sammy Caiola in a Jan. 31 Sacramento Bee story.

The pain temporarily subsided, then increased, he told his 22-year-old wife, Nataliya, during several phone calls.

By the time he made his delivery in New York, his mouth had become severely swollen. Feeling too weak to drive back alone, his brother joined him to help him make the long journey home. By the time they reached Utah, Kondratyuk’s breathing had become so labored that his brother took him to a hospital, where Kondratyuk was placed on oxygen, Caiola wrote.

He then was rushed to a larger facility in Salt Lake City, where doctors administered stronger antibiotics and put him on dialysis. By then, the tooth infection had spread to his blood and lungs, according to his wife.

“They had him on medication, they tried everything they could,” said Nataliya Kondratyuk, who traveled to Utah to be at her husband’s bedside. He died on Jan. 30.

Deaths resulting from complications from dental infections are far rarer than they were in the days before antibiotics – but not unheard of.

As Caiola noted in her story for the Bee, a 2013 study published in the Journal of Endodontics examined 61,000 hospitalizations for dental abscesses between 2000 and 2008. The researchers found that 66 of those patients – or roughly one in 1,000 – died.

Vadim and Nataliya Kondratyuk were born in Ukraine but raised in California. After meeting as teenagers in church, they married in 2012 and were raising two small daughters, Caiola wrote.

His family is struggling with their loss. “He was a great husband,” his wife said. “He had this smile on all the time.”