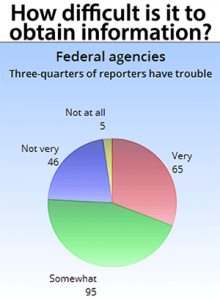 Three-quarters said it is difficult to get the information they need from the federal government, and two-thirds reported difficulty getting adequate responses from state government.

Conducted this spring by AHCJ’s Right to Know Committee, the anonymous online survey sought to identify the hurdles that AHCJ members face covering government activities. It asked about federal, state and local agencies – and found problems at every level. But respondents said their biggest needs and biggest hindrances were with the federal government.

“Our survey confirms much of what we have been hearing anecdotally: too often, journalists — and by extension, the public – encounter delays and other barriers to information that government ought to readily provide,” said Irene M. Wielawski, chair of the organization’s Right to Know Committee. “But the survey also yielded detail about our members’ experience that will be useful in AHCJ’s ongoing work with government media officials to improve communication.”

The full survey can be found here and a summary here (PDF).

In the survey’s comment sections, respondents described their frustration with seemingly pointless procedural hurdles. “Public information officials tend to forget that their job includes the public,” one respondent wrote, adding that these media spokespeople “tend to adopt a defend-and-deflect posture.”

Some respondents objected to the practice of supplying written answers to questions. Two-thirds reported that, when they provided written questions to federal agencies, they “sometimes” or “often” got written answers instead of a requested interview. A quarter said these written replies from federal agencies are “rarely or never” adequate. But 45 percent said this form of response “sometimes” met their information needs.

In comments, respondents said written statements rarely fully answer the question, leading to time-consuming back-and-forth. “Written responses to written interview questions are the worst possible waste of time for everyone involved,” one wrote.

Others commented, however, that written responses can be helpful when they are prompt, succinct, and informative.

Among other top findings:

The survey was sent to the association’s professional category members during February and March 2016 and just over 20 percent completed the survey. Participants included a disproportionate number of freelance members. Freelancers make up 24 percent of AHCJ’s membership but accounted for 46 percent of those who answered the survey. There was also a slightly higher representation of online journalists and of journalists with more than 20 years’ experience.