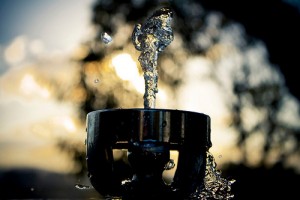 In the wake of the water crisis in Flint, Michigan, concerns over lead and water have expanded beyond the Detroit suburb. From Maine and Iowa to California and elsewhere, citizens, officials and news media are turning their attention to water quality issues.

Rosen and his co-author, Gerald Markowitz, describe the multiple aspects of the long battle with lead in their book (which NPR also excerpts).

“It’s often a problem in cities that were built between the early 1900s, late 1800s and the early 1940s, and in cities where cheaper housing sometimes exists, because lead is relatively cheap, and in which unions did not have any power to make sure that lead was not used in their pipes,” he told NPR in March.

Though lead pipes stopped being used in the 1980s, many are still in use around the country, according to the two authors. And it’s not just lead pipes. Even some copper pipes and pipes made of other materials can have potential contamination problems if there is lead in the solder, fittings or other parts.

Arthur Delaney, a senior reporter with The Huffington Post recently wrote about other U.S. cities struggling with the impact from lead pipes in the aftermath of Flint.

“Roughly 10 million American homes and buildings receive water from service lines that are at least partially lead, according to the Environmental Protection Agency. Service lines are the pipes connecting water mains to people’s houses. Lead ones are mostly seen in the Midwest and Northeast,” Delaney wrote.

USA Today looked at lead in more than 2,000 water systems in all 50 U.S. states in a multi-part investigative series. Their review of U.S. government data found “600 water systems in which tests at some taps showed lead levels topping 40 parts per billion (ppb), which is more than double the EPA’s action level limit.”

What’s more, “enforcement, which is implemented state by state, can be inconsistent and spotty,” according to a piece by USA Today’s Alison Young and Mark Nichols, which included a searchable nationwide database for readers to look up their state.

Schools are a particular concern, with water sometimes sitting stagnant in pipes for extensive periods and with few schools having regular testing programs.

NPR’s Jennifer Ludden examined the profound impact of lead in school drinking water that now is triggering some high-cost fixes such as remediation, use of bottled water or daily flushes of the systems.

“Baltimore and Los Angeles are not the only cities dealing with this problem: In recent weeks, officials have issued warnings after finding elevated lead levels at schools in Washington, Ohio, upstate New York and New Jersey,” Ludden reported.

The New York Times also looked at the issue. And it’s not just water. Rosner and Markowitz note soil and air contaminstion can be just as problematic.

Paint containing lead continues to be one of the biggest scourges. Among other cities, Baltimore still is struggling with lead paint all these years later with hazardous chipping lead paint still a problem in many of its infamous row homes, according to another recent NPR report.

As more cities, suburbs and school systems take a closer look at their water – whether on their own or under pressure from residents, parents and the press, expect more questions to arise, not only about water, but about infrastructure, costs and disparities.

Have you written about lead in your area? Found a good resource? Send your stories and tips as we keep adding to our member resources on the issue: determinants@healthjournalism.org.