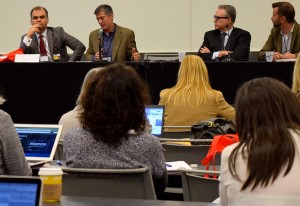 Photo: Pia Christensen/AHCJSpeakers representing a hospital, a telemedicine company and a professor and researcher took part in a panel moderated by Politico Pro’s David Pittman.

At Health Journalism 2016 on Friday, David Pittman, an ehealth reporter for Politico, had some good advice for reporters covering telemedicine: Define your terms. Telemedicine can mean the most gee-whiz new smart phone app or wearable (think “smart bra” for heart monitoring)  – or an old fashioned telephone call between patient and doctor.

The breadth of the field, and some of the challenges were  illustrated at the Friday panel.

Dr. Henry DePhillips, chief medical officer of Teledoc Inc., described his company’s view of how telemedicine can fill in some of the gaps in the health care system, particularly for the 65 million people who live in “primary care deserts,” for people having trouble accessing behavioral health care, and those who go to the emergency room unnecessarily. Teledoc now operates in almost every state, and he drew a picture of how it can provide an alternative to a  delivery system that pushes people to high cost settings.  Telemedicine gives patients (and family caregivers) affordable, convenient access to care, and enables the patient to control his or her information.

DePhillips got some questions about the remote practice of medicine – including things like when to know to prescribe antibiotics and when an ailment is viral – but he said Teledoc follows established guidelines. He also said its doctors do this work on the side, along with regular “bricks and mortar” medicine.

Dr. Marco Costa, director of Interventional Cardiovascular and Research and Innovation Centers and the chief innovation officer at University Hospitals, stressed the role of remote monitoring of patients with chronic conditions, such as congestive heart failure or following a patient after a kidney transplant. For instance, a home monitoring program can keep tabs on a pacemaker battery,  before there’s a crisis and without unnecessarily frequent  in-person checks at the doctor’s office He also described how telemedicine can deliver access to specialists or subspecialists to a a patient with a complex condition at a remote site – a small rural hospital for instance that can benefit from a “telestroke” or “teleheart” program. But he said reimbursement is still a big problem from Medicare and other payers.

Dr. Curtis Lowery, fetal medicine professor at the University of Arkansas for Medical Science, developed a program for high risk pregnancies, called ANGELS, which Medicaid does pay for.  The program has a far longer record than many in telehealth – work on the program began in 2002and it has a long-established record of improving outcomes for mothers and babies. It uses internet, video teleconferencing, call centers and other tools 24/7 for monitoring pregnancies and doing patient outreach and education.  It brings expertise to women and babies in remote, rural, underserved areas of Arkansas.

Pittman compiled a handy tipsheet defining some of the key issues in telemedicine.